Visually spectacular ‘Flute’ is a must-see 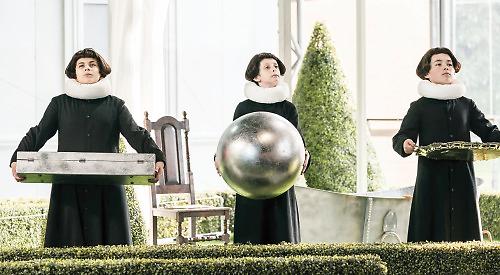 THINK Peter Greenaway’s The Draughtman’s Contract and you have the set for act one of Garsington Opera’s new production of The Magic Flute.

Low cut box hedges, clipped topiary and geometric shapes frame the facade of a country house. The low evening sun spills on to the stage and the sense is that the magnificent gardens at the Wormsley Estate have extended into the auditorium.

Mozart’s score is full of gems and the excellent Garsington Opera Orchestra takes it at a brisk crisp tempo.

Billed as “a Flute for our times”, Jones brings a new slant to this well-worn timepiece.

No pantomime costumes and special effects here, but sleek gowns, suits and young lords on roller skates. No snake pursuing our hero lost in the woods, but a hosepipe delivering electric shock therapy in a bathtub. And the chequer board carpet and heavy red drapes of the masonic lodge paying homage to Twin Peaks.

Jones explores misogyny and the role of women. A beefed-up heroine Pamina, played by Cardiff Singer of the Year award-winner Louise Alder, contrasts starkly with the modest bonnets of the female chorus reminiscent of The Handmaid’s Tale.

Rather than the customary nightie-clad passive heroine, Alder is brave and steadfast. So too is red-haired exuberant Papagena played by Lara Marie Muller — shades of Poldark’s Demelza. Both appear with shotguns!

Alder’s performance is outstanding — her vocal and acting ability equally impressive. But the entire company is strong and full of fresh new talent.

Garsington Opera Chorus, emerging talents of the future, make a consistent, strong sound — James Cresswell’s Sarastro is authoritative with his rich bass tones, Benjamin Hulett is a heroic Tamino, and Jonathan McGovern is a tender as well as comic Papageno.

The only disappointment was Sen Guo’s Queen of the Night. Despite the excellent clarity and articulation of her singing, and this is a huge part, there was no sense of suspense or foreboding in her actions, and this dampened down the later scenes.

Overall, this production is a must-see. It is both fresh and different and visually satisfying.