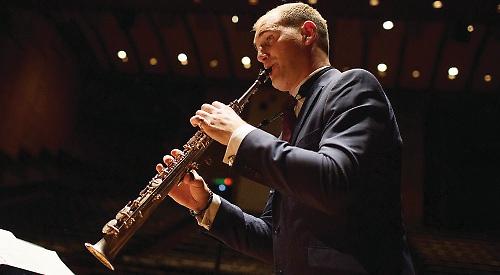 HIS day job is professor of saxophone at the Royal Academy of Music and he’s performed all over the world as a touring musician — now Huw Wiggin’s debut album has made the Classic FM playlist in its first week of release.

If that sounds like the sort of résumé James Bond would envy, you haven’t heard the half of it.

On the morning we speak Huw, 31, confesses to feeling “a bit tired”, having just returned from a break the Seychelles.

“I hadn’t really had a holiday for a while so I just decided to go for a week,” he says. “I’d always wanted to go to the Seychelles because I’d heard it’s supposed to be one of the most beautiful places in the world, and it was phenomenal — so good.”

It turns out that Huw is pretty well travelled, all things considered.

“As a musician my work’s divided into different parts. My main job is at the Royal Academy of Music, which I go into quite regularly. But then I work on cruise ships as well, so I probably do about four contracts a year.

“The reason I do that is to perform but mainly just to travel, so I always pick a new area to go to every year. Over the past year I’ve been to India, Sri Lanka, Singapore, South Africa and New Zealand — which was amazing.”

Judith Chalmers had better watch out, as Huw also tours with the Ferio Saxophone Quartet, which will take him out to New Zealand again in the not too distant future.

Before that, however, he has an album to launch. With 25 tracks and a running time of just over 70 minutes, Reflections also features the talents of John Lenehan on piano and Oliver Wass on harp.

Having been approached by Orchid Classics to make his solo debut, Huw says he was at first unsure what material to include.

“Through my music I’m an interpreter, really, I’m not a composer. I was struggling about what music to put on it — but in the end I just went for it. Music that I liked, really. All the pieces do show reflective points and different sides of my character, so that’s why I called it Reflections.”

Huw, who grew up in Oaks Road, Shiplake, and attended Gillotts School, is today a proud ambassador for the Henley Music School.

“I was so lucky when I was young because I went to Trinity Primary in Henley and there was a headteacher there called Alfie Hay and also back then there was a lot more funding for music and local councils, so I had the opportunity to have free music lessons.

“So I had lessons on recorder and on cello, also with a lady called Wendy Hawkins. This was when I was I was like seven or eight years old. And then I just really loved performing through the Henley Youth Festival as well — that was co-founded by Alfie Hay.

“I just regularly performed all the time and basically I realised that I just loved performing one way or another. It wasn’t specifically music but it was being a performer that I liked.

“It’s almost like a drug — you just get into it and you can’t live without it, basically.”

When the time came to record Reflections, however, the challenges were of a slightly different order — a smaller audience, for starters.

“Well, a sound engineer and a couple of other people — maybe my manager!” laughs Huw.

“It’s an interesting process overall, being in the studio, because it’s not often like live performance. What you do at the beginning is you play through the whole track and then you’re really looking for perfection throughout the whole of the piece.

“When you’re performing live you’re just doing the whole thing and really in the studio it’s about trying to find special places — I mean, it’s really in tune and it sounds slightly more mathematical, I find.

“I’m slightly more unmusical in the studio, I’d say, because you’re just looking for sections of perfection rather than for the overall musicality. Recording slower pieces is especially difficult, I have to say, because during performance it’s easier to get into the zone with an audience there — and that’s the biggest difference, actually, is having an audience.

“The adrenaline when people join a performance is amazing — and you’ve got to try and recreate that in a recording situation. And that’s a real challenge.”

Last Saturday, the day after the album’s release, Huw was back in Henley to perform at a concert in aid of Chiltern Centre for disabled children. Organised by the Shiplake Community Choir, with whom his mother Sally sings, the fund-raising event at the Christ Church Centre saw Huw joined by his colleagues from the Ferio Saxophone Quartet.

“Part of what I do is I’m very passionate about charities,” says Huw. “My sister was handicapped and so I’ve always been quite close to supporting disabled charities.”

“I think that brought me to music as well, actually, in a way,” says Huw. “Because I’d always play when I’d go and visit her, so that was really important to me.

“It was also saxophone as well because saxophone’s quite a happy instrument and I’d always play and it would always make her laugh or make her smile in some way.”

When it came to picking what music to include on the album, Huw said Schubert’s song Die bist die Ruh (“You are rest and peace”) had been the most obvious choice — partly as a reminder of the time he spent living in Germany.

“But actually,” he reflects, “that’s the one piece I think that because it draws upon different sort of stages [in life] that piece will definitely bring me back to Rebecca. And especially for my mum — because I played the album to my mum and that’s her favourite track.”

• Tickets for the official launch concert for Reflections on June 28 have now sold out, but details of future concerts — and those of the Ferio Saxophone Quartet — are regularly updated on his website at www.huwwiggin.com/tour