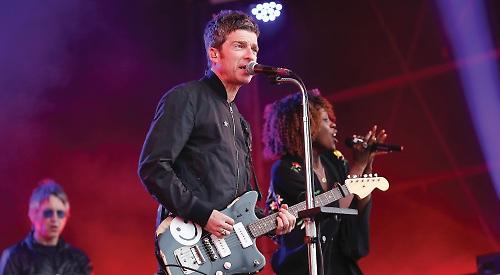 THREE solo albums in and Noel Gallagher finally seems to look comfortable in his own skin.

His latest effort Who Built the Moon? is by far one of his most interesting and is the sort of record he’s been threatening to release since parting company with Oasis.

But the critical acclaim has not been matched by sales and he has suffered the ignominy of shifting fewer copies than his brother Liam’s first solo outing, As You Were.

Not that this seems to bother Noel as he opens his set at Blenheim Palace with the first four tracks from the new album.

After the initial excitement of near-instrumental Fort Knox the enthusiasm of the crowd seemed to wane slightly as they were clearly hoping for something more recognisable.

The mood picked up when he launched into In the Heat of the Moment and renditions of Ballad of the Mighty I, If I Had a Gun and Dream On as Gallagher also found his voice.

But clearly it was the Oasis classics many had come for and they got their wish with Little by Little and The Importance of Being Idle, accompanied by voices singing in unison, louder than anything that came before.

The acoustic Dead in the Water, a live bonus track on his new record and probably one of his best efforts since the mid-Nineties, was exceptional, notwithstanding the swarm of flies that put him off half-way through.

Half the World Away provided another trip down memory lane and is still fantastic, although Wonderwall (“the song that paid for my big house”) seemed to lose some of its sparkle.

Gallagher seemed at his happiest when playing his more experimental material, like the revamped The Right Stuff with his female backing singers and percussionists, with which he began his encore.

A stripped down version of Go Let It Out, although a nice surprise, left you longing for his younger brother on vocals but this was more than made up for by Don’t Look Back in Anger, which you can never tire of hearing.

Then, after telling us that’s he’s moving to the area next year so house prices will go up (“You’re welcome”), he closed the show with a rousing performance of the Beatles’ classic All You Need is Love.

This dose of nostalgia served to remind us of where he’s come from after proving his career is in no way stuck in the past.