Songs from the shows were a surreal treat in school chapel 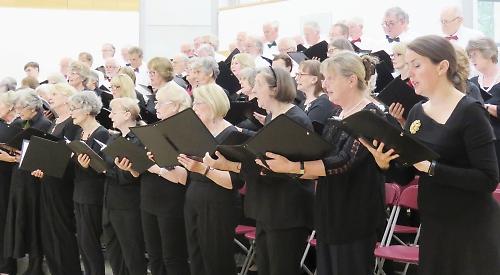 IT was definitely “show time” at Pangbourne Choral Society’s concert on Saturday.

The evening consisted of well-known songs from musicals of the last 50 years, with music director Ellie Calver playing a prominent part throughout, singing as well as conducting the choir.

The programme was well chosen, light, jolly, theatrical, unconventional — and well received by the audience.

It opened with a robust organ rendition of Phantom of the Opera’s overture (Lloyd Webber) with the organist, Andrej Ivanovic, disguised as the Phantom.

This led straight into the duet, All I Ask of You (Lloyd Webber again), sung dramatically by Calver (soprano) and Jonathan Stirling (tenor).

Arthur Bell was a stylish accompanist on the piano, setting the tone of the concert, which had solos, duets and choral numbers interwoven.

The programme suggested there would be communal singing towards the end. Clearly, this was not going to be a conventional choral concert.

From Phantom, the clock was rolled back for the first choral number, Aquarius (McDermont) from Hair, the iconic rock opera. This was a somewhat surreal moment — rows of singers in concert dress singing a rock number while studiously studying their scores. Did no one remember what it was like back then?

The choir gained confidence as it progressed and sang melodiously although not always in time with either the conductor or each other. They also took some time to catch the conductor’s obvious joy in the music as she danced about on the podium waving her arms around, her signature conducting style.

An a cappella rendition of Another Suitcase in Another Hall (Lloyd Webber), sung sweetly by one of the choir’s sopranos, Judi Hodgkin, backed by the choir, was brave as it is hard to maintain pitch without accompaniment, and the soloist’s microphone may not have helped her in this task.

After a couple of solos and a duet from Calver and Stirling, the first half finished with the choir’s robust singing of Guys and Dolls (Loesser). In the second half the choir sang a medley from Matilda the Musical (Minchin), and Send in the Clowns (Sondheim) and there were two more solos from Calver.

More surrealism followed. Arthur Bell took over conducting and the task of persuading the audience to join in singing two songs from The Sound of Music (Hammerstein).

Indeed, he went further and had at least some of the audience and the choir doing actions to Do-Re-Mi.

The choir smiled broadly and after several repeats of this somewhat embarrassing part of the concert, the proceedings ended with a joyful medley of show songs including a lovely performance of Tonight from West Side Story (Bernstein).

This was certainly a different sort of concert — some nice choral singing plus quite a lot of fine singing and dramatic performances from Ellie Calver and Jonathan Stirling. A light summer treat.