Festival’s opera sensation has the world at her feet 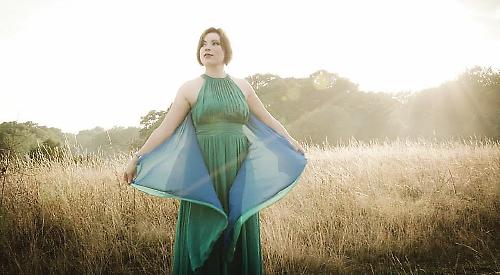 SHE made such an impact at Garsington that the opera festival has booked her for the next two years.

The broadsheet reviewers were unanimous in their praise of Natalya Romaniw’s performance in Tchaikovsky’s Eugene Onegin, with Hugh Canning of the Sunday Times hailing the Welsh soprano as “a Tatyana in a thousand” and Michael Church of the Independent calling her “the Tatyana of my dreams”.

Audiences at the Wormsley estate will have to wait until May 29 next year for Romaniw’s festival-opening performance as Marenka in The Bartered Bride by Bedrich Smetana.

But here in Henley, the 31-year-old’s next starring appearance is just around the corner.

At 8.30pm on Sunday, July 15, Romaniw will take to the Henley Festival’s Floating Stage as one of the soloists with the English National Opera.

A festival spokesman said: “By popular demand the festival welcomes one of the UK’s foremost opera companies, the English National Opera, who are making a rare foray away from their historic home at the London Coliseum.

“With soloists, full orchestra and chorus — and under the baton of ENO music director Martyn Brabbins — their repertoire is taken from many of the greatest operas including Carmen, The Marriage of Figaro, Madam Butterfly, Turandot and La Traviata.

“The evening is hosted by ENO’s master of the topical adaptation, Richard Suart, who will also top the evening off with I’ve Got a Little List from Gilbert and Sullivan’s The Mikado written specially for the occasion.”

Alongside Suart, who will be doubling up as a baritone, Romaniw’s fellow soloists on the night are tenor Peter Auty and baritone Roland Wood.

Her own star has been rising fast since 2012 when she won both the first prize and the song prize at the Kathleen Ferrier Awards, having previously won the gold medal while a student at London’s Guildhall School of Music.

Writing in the Daily Telegraph, Rupert Christiansen called her 2016 portrayal of Tatyana “by turns vulnerable, imperious and thrilling”, adding: “This is an interpretation that could grow to greatness.”

Mark Valencia of WhatsOnStage found her performance “effortless”, noting that “she hides her anguish beneath a mesmerising capacity for stillness. With Romaniw, moments when nothing happens are the ones where the most is going on.”

In referring to “opera singers” it is sometimes easy to forget the acting side of what they do.

“Oh yeah, absolutely,” says Romaniw. “We are singing actresses and actors, really, and even in a concert such as the one we’re going to perform for you in Henley there’s got to be an element of acting as well because you have to understand what you’re singing in order to emote and to have people believe you, you know?”

Last year she told an interviewer that her Tatyana for Garsington was the performance she was most proud of to date — and Pushkin’s heroine is a role in which she is continuing to make waves.

“It’s become quite a pivotal performance for me in terms of my relationship with the role and I’ve gone on to sing it for the Welsh National Opera and I’m currently singing it for Scottish Opera,” she says. “That performance, little did I know at the time, was to become one of my signature roles — so I’m really happy I got it and thankful to Garsington for that.”

This November, Romaniw will make her full ENO debut as Mimi in Jonathan Miller’s classic production of Puccini’s La bohème.

The singer, who grew up in Swansea and now lives in Cardiff, owes her surname to her Ukrainian grandfather, who settled in Wales during the Second World War.

It would be an understatement to say she has “arrived” in the world of opera, but how did her journey begin?

“I started taking classical singing lessons when I was 16,” she says. “I’d always sung beforehand but it was always musical theatre and I was involved with the local amateur dramatics group.

“So I’d always loved to sing and act but in order to pass my grades I had to take classical singing lessons to sing the repertoire for those exams. It really highlighted to me my strength with my voice, but also my affiliation as a young singer with languages — the culmination of languages, acting and singing was everything I had been focusing on in what I took for A-level.

“Then my singing teacher suggested that I audition for the London music colleges and I gained a place at the Guildhall School of Music and Drama. And it was really there that I discovered opera because I hadn’t been introduced to it throughout my childhood or even really when I was doing my A-levels — I’d never seen one.

“So it was really only when I went to the Guildhall and began my studies there that I was really introduced to it — I went to see lots of things at Covent Garden and the ENO and I really thought ‘this is what I want to do’.

“That’s how I came to it — and I think there’s something to be said for being around people who are concentrating on the same thing as you are, whereas in Swansea I didn’t know any opera singers.

“Being in a class where everyone wants to sing opera was a really wonderful thing and they were just so interested in it. It really brought me out, encouraged me and gave me a real flavour for it.”

Before she takes to the stage on July 15, there is one small challenge facing Romaniw.

“I have my debut with the ENO this coming autumn, so I’m having to learn all the music that I happen to know already in English. For instance, one of the arias I’m singing at Henley is Madam Butterfly’s Un bel dì, which is very popular, so I have to learn everything in English. That will be the task for me in the next couple of weeks!”

• Tickets for the English National Opera at the Henley Festival on Sunday, July 15, are priced from £35 to £90 (plus booking fee). For more information and to book, visit www.henley-festival.co.uk