Flawless Garsington weather was a true omen of greatness 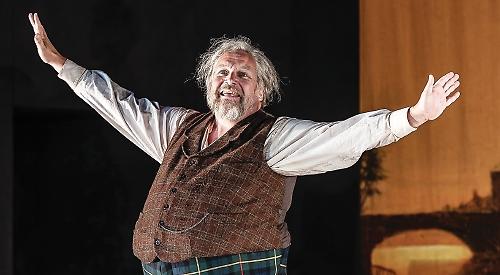 THE weather at Wormsley Estate, home to Garsington Opera, has an uncanny tendency to mirror what happens on the stage.

Last Saturday, true to form, the perfection of a Mediterranean summer’s day presaged a faultless interpretation of Verdi’s comic masterpiece, Falstaff, directed by Bruno Ravella and supported by the Philharmonia under conductor Richard Farnes.

The overweight, arrogant and penniless Sir John Falstaff bounces his two unruly companions, Bardolfo and Pistola, after they refuse to help him seduce two well-heeled married women and fleece them of their money.

Alice Ford and Meg Page are outraged to discover that they have received identical love letters, while the piqued Bardolfo and Pistola warn Alice’s husband Ford of Falstaff’s plan. Local townsfolk join in to teach Falstaff a lesson in a Windsor Forest transformed into a Midsummer Night’s Dream-style fantasy world.

In a separate sub-plot, Ford wants to marry off his daughter Nannetta to the unappealing Doctor Caius, but she persists with illicit rendezvous with her young lover Fenton. Such comedic potential was cleverly milked, each of the performers proving exceptionally talented.

As something of a surprise package, soprano Soraya Mafi (Nannetta) and tenor Oliver Johnston (Fenton), having started in relatively minor capacities, emerged in Act III as formidable duet partners and solo performers. Their heartfelt soliloquies were beautifully sung.

The set, designed by Giles Cadle, and stagecraft were stunning throughout, never ceasing to surprise — with boats and trains moving across the stage, a random hunter shooting birds and, in the final forest scene, swathes of green foliage framing a panoply of myriad colours and fairy-tale costumes.

The latter was a wonderfully choreographed affair involving all members of the cast and the excellent Garsington Chorus, dressed as fantastical forest insects.

Falstaff emerged good-humouredly from his uncomfortable comeuppance, while the two young lovers got Ford’s blessing.

Richard Farnes and the impeccable Philharmonia provided the perfect complement to the quality of the vocal performances, bringing Verdi’s wonderful score vividly to life and setting the seal on a production of the highest order.