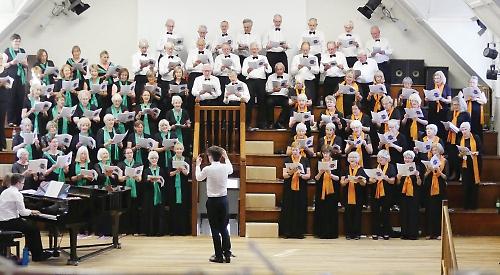 The South Chiltern Choral Society presented “An Evening on Broadway” in the school hall at Queen Anne’s on Saturday evening and took the audience through the music of Gershwin, Porter, Rodgers, Bernstein, Sondheim and Schonberg.

Musical theatre songs all composed by those with a classical background and so it felt like taking the music back to its roots, back to just the music.

I really enjoyed the choir’s medley sections — every member of the choir was confident in their performance, the harmonies were strong and they followed the conductor well, creating a clean performance.

My highlight, though, was actually Thomas Graff’s piano solos from The King and I and Carousel. He was truly feeling what he was playing and I was totally absorbed. I would look out for him in concerts in the future.

That being said, my favourite songs were those from Follies, performed by Freya Jacklin. She appeared to be very comfortable singing them and produced a strong vocal — although I felt that having sheet music stopped her from truly engaging with the song and therefore, with the audience.

When a wall of sound hits you from 75 people who are obviously truly enjoying what they are doing, you feel something. Those around me certainly did.

Although as a serious musical theatre fan I struggled at first, once I got into the concert I thoroughly enjoyed it.

I saw the songs I love so much in a totally different light and I enjoyed the experience.

It was a lovely way to spend a balmy summer evening and I would highly recommend checking out one of the society’s concerts in the future.