Post-punk folk band are called to the bar 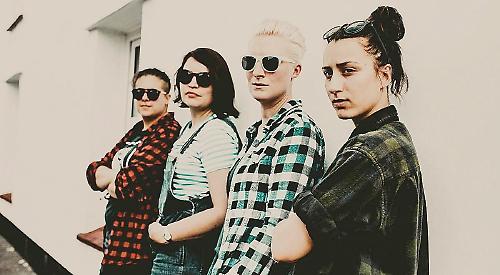 THEY’RE a folk band from Oxford who specialise in post-punk baroque-pop. And next weekend they’re coming to Henley.

Along with indie pop singer Didi from Hertfordshire, Death of the Maiden are playing Magoos bar on Friday (July 20), when the Hart Street venue will be hosting the latest in its monthly series of “Loud & Clear” gig nights featuring intimate amplified music.

The four-piece are made up of singer and guitarist Tamara Parsons-Baker, guitarist Hannah Bruce, bass player Jenny Oliver and drummer Emma Coombs.

Tamara, who jokingly describes herself as “not your average double-barrelled Oxford singer-songwriter” grew up in Forest Hill to the east of the city — something she has come to regard as a formative influence.

“My brother and I were always outdoors playing in the fields and exploring,” she says. “I believe nature is a huge inspiration for me and tool of expression. Many of my songs feature nature as an element to expose feelings and fears. Nature was a place I could escape to when things were hard — a place to create new worlds and stories.”

As the organiser of a monthly music night called All Tamara’s Parties, the singer is plugged into Oxford’s bustling live music scene and has also staged her own festival. Tamara originally started out as a solo artist but eventually found herself gravitating towards being in a band.

“I love playing solo and still do,” she says, “but I’ve always wanted to be in a great band with dedicated people to expand on my songs. Plus, it’s a lot more fun playing in a band and having a laugh along the way. It’s taken me a while to find the right people but now I have I couldn’t be happier. Things take time and should not be rushed. Right now I feel that I’m writing the music I’ve always wanted to be able to write and working with musicians I’m supposed to be working with. I’ve searched for this band, but I think it’s natural that is happening at this stage in my musical path.”

With the band’s collaboration bearing musical and creative fruit, does Tamara have a preferred way or writing songs?

“There is no set method for me. It’s great when the song and the lyrics come out at the same time, but often it starts with an idea or a few lyrics. I usually let the idea brew around in my head for a few days or weeks.

“Once it has simmered for long enough, I sit down with the guitar and get to work. Sometimes songs come at awkward times — like when you need to leave the house to play a gig or should actually be rehearsing for a show.

“Hannah and I have written a few songs recently and they are often wonderfully comedic and playful. That’s great as most of my songs are quite dark, working with another person can help you tap in to different parts of you for a song. Often songs just come out in a big splurge and my job is to try and steer them.”

Has her experience of writing and creating changed her as a person?

“Writing songs made me feel complete. It was also a great outlet for me to get out anything that I was struggling to talk about or acknowledge. The story of Horses — our next single — came from a dream. In the song the protagonist is battling against the elements to survive, at each near-miss she manages to hang on and survive just a little bit longer. When I wrote down that dream and made it into a song, I honestly just thought it was about horses, wolves and fear. Only later did I realise it was about anxiety, trying to juggle too much at the same time, trying to keep afloat in a sea of change, and the stress of it all was overwhelming. That dream and song helped me to take action. So songwriting has enabled me to be myself, and to be able to help myself too.”

• Doors open at 7.30pm, with tickets £6 in advance and £8 on the door. For more information and to book, visit www.ticketsource.co.uk and search for “iamusic”. Ticket holders are also entitled to 25 per cent off any pizza on the night.

Q. What are your musical influences?

A. When I was younger I listened to a lot of Joan Armatrading, Tracy Chapman, Elvis, and the Beatles. When I was 13 I had a huge love-in with hip hop — Missy Elliott, TLC, Busta Rhymes, Mad Rapper — and refused to listen to anything else until I heard Californication by the Red Hot Chili Peppers at the age of 15. Then it was Incubus, the Cranberries, Garbage. At 18 I started listening to loads of folk music like Joni Mitchell, Neil Young and The Band. Then I had two years of just getting in to loads of old school jazz when I was in my early twenties. Nowadays I’m into all sorts — Courtney Barnett, L7, Janella Monae, The Breeders, Bully, Partner, Anita O’Day, Cherry Glazerr, Billie Holiday, Lady Ga Ga...

A. Mostly my music is described as dark, emotive, harrowing. I like to tell stories in my songwriting. Sometimes you just need to write a piece that is purely about an emotional time or experience. It’s an outlet above anything else and so often unpredictable in terms of content and direction. But I do like songs with a narrative and/or characters with a side of bleakness. The most important thing for me is that music makes you feel something, so when I write music, I hope that it makes people feel something too.

Q. Death of the Maiden is an interesting name — where did it come from? Is it anything to do with the play/film Death and the Maiden?

A. Death and the Maiden is a piece of music by Schubert, it’s very moving. It was composed in 1824, after the composer suffered a serious illness and realised that he was dying. The band spent a long time coming up with names, and as a band of feminists we wanted something that would be representative of this but also hint to our sound. We changed “and” to “of” and immediately we had the perfect name for our band. Death of the Maiden is enticingly dark and to us the word “Maiden”’ represents the patriarchal view of what is feminine, female. Death to that, and so Death of the Maiden.

Q. How did you and your bandmates meet?

A. Emma our drummer was recommended to me by Zahra from Young Women’s Music Project. Emma had seen me play solo a couple of times and so knew my material and liked it — that was lucky! I knew Hannah from the local scene as she is a singer/songwriter in her own right. I love her writing and style and thought she would be perfect as lead guitarist. Hannah and I saw Jenny playing bass at my festival — All Tamara’s Parties — in her band Lucy Leave and we were blown away. We asked her there and then if she wanted to come and play with us. I’ve been accused of forming a supergroup but in all honestly, I just really liked what they were doing individually and as soon as we were playing together the chemistry worked. It just so happened that they are some of the finest musicians in Oxford.

For more information on Death of the Maiden, including gig dates, visit www.tamaramusic.co.uk or find them on Facebook.