Ol’ Blue Eyes is back, thanks to singer who does it his way 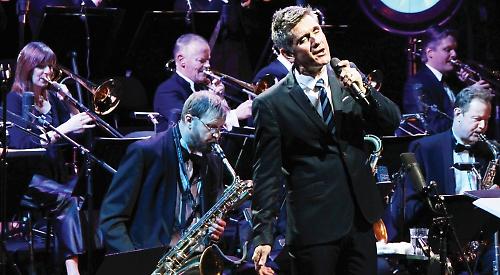 CURTIS Stigers’s appearance at the Henley Festival tomorrow night (Saturday) is in many ways a happy accident.

Together with the Ronnie Scott’s Big Band, the singer, songwriter and saxophonist will be taking to the Floating Stage at 8.45pm to channel the hip, swinging chemistry of Frank Sinatra and the Count Basie Orchestra.

Specifically, they will be performing songs from Stigers’s most recent album, One More for The Road — itself a live recording of a one-off concert in Copenhagen with the Danish Radio Big Band.

This was conceived as a tribute to Ol’ Blue Eyes’s legendary 1966 live album Sinatra at the Sands.

Recorded in the Copa Room of the former Sands Hotel and Casino in Las Vegas, the album is an elegant and humorous document of a now vanished age.

Arranged and conducted by Quincy Jones, who later produced Michael Jackson’s 66 million-selling Thriller, it was Sinatra’s first live album to be commercially released and contains definitive readings of a number of the singer’s best known songs.

A long-time fan of Sinatra, Stigers was pleased to accept the invitation to perform in Copenhagen, but at the time he had no idea where it would lead.

“It was one night,” he says. “I was invited over about — it’s been four or five years now — to perform kind of a tribute to Sinatra at the Sands live in Copenhagen with the Danish Radio Big Band. It was broadcast live on Danish radio.

“And then a couple of months later they sent me a recording of the radio broadcast and I was really surprised at how nice it sounded. I mean, I love Sinatra — I studied his recordings for the last 35 years. But the idea of doing a Sinatra record didn’t cross my mind until after the Copenhagen recording came back.

“It sounded good. I sent it to my manager. He loved it. He sent it to the record company. And so eventually it came out as a record. But yeah, the idea of me reinventing Sinatra is — I mean, I just don’t think you can do it. I think what it is, is an homage. I don’t try to sing like Sinatra, I just — I sing like myself.

“Obviously we’re paying tribute to Sinatra, but particularly — or in addition to Sinatra — to the people who did the arrangements. Because these arrangements were basically pulled from either the Sinatra at the Sands record or, some of them, from studio recordings.

“Nelson Riddle and Billy May and Quincy Jones and a couple of others — these people created music that I think is some of the finest musical composition of the 20th century. And, you know, they sort of get lost in the mix. All the horns, all the woodwinds, it’s amazing — it’s as great as any writing that happened in that century. So, anyway, I’ll get off my soapbox.”

None of which is intended to diminish Sinatra’s contribution.

“The thing that Sinatra did that I try to do as well, and I’ve learned this from him as much as anybody, is he would take a song — I mean, he never wrote a song but we think of Sinatra songs, we think ‘Oh, that’s a Sinatra tune’ — but he didn’t write them, he took songs that other people wrote, great songs, and he made them his life story in a three and a half minute version, you know?

“I mean, when you hear Come Fly with Me it’s the sweat swaggering ‘Come on baby, let’s fly down to Peru for a cocktail’ — that’s Sinatra. And he invented his persona through these songs, these films, you know?

“One for My Baby (and One More for the Road) is the sad Sinatra after Ava Gardner left the second time, you know? There’s Sinatra sitting in the bar drowning his sorrows and telling stories to the bartender.

“Just that alone, hearing the Sinatra versions and getting inside of them and then making them my own — figuring out a way to sing my version of them, make them a part of my life story, that was a great education for me, you know?

“I mean, I like making records, but being on stage and sort of reinventing it each night, changing this line or that line just enough to change maybe the meaning of a song — that’s what’s fun about this for me. Telling stories. The difference [from Sinatra’s version] is my take on it, the way I sing it.

“On my other albums, my studio albums, all of my jazz records — and I started making jazz records in 2001, I’ve made 10 or 11 or 12 of them — I’ve taken songs by, you know, Elvis Costello and Nick Lowe and Willy Nelson and Neil Finn from Crowded House, I’ve taken these pop songs and I’ve tried to totally reinvent them musically.

“And I really love doing that. That has been my focus for the last 15, 16 years — reinventing jazz by taking modern pop songs and putting them in.

“This record [One More for the Road] is more of an homage — we definitely use the arrangements that are already there because it just makes sense. But I love songs like Hurt by Nine Inch Nails that Johnny Cash did before he passed away. I love a version of a song that completely reinvents it and makes it fit the artist and tells a new story. That’s a really cool approach.”

“I’ve cut some songs by people, probably people you wouldn’t even know, but trying to sort of create my own approach to jazz music. I just cut a song by a wonderful singer-songwriter that I’m sure nobody’s heard of — John Fullbright from Oklahoma.

“And then sometimes it’s the other way around. Sometimes I’ll cut a song because it’s so well known that I feel like it will make somebody think ‘Oh, wow, what a strange way to do that Beatles song.’

“I like the idea of sort of turning a song on its ear and bending it and turning it upside down a little bit. So yeah, it’s an interesting process and conceptually sometimes that’s a big part of it, is thinking about why I’m cutting it and what the statement of cutting a particular tune might be.”

“Yeah, that was a lot of fun. I happened to be on Arista Records when they were making The Bodyguard soundtrack, so they gave me a slot on the record and I was playing that song (What’s So Funny ’Bout) Peace, Love and Understanding — loosely because I needed a song with a lot of tempo at the end of my set.

“I mean, I always loved that song — I knew it as an Elvis Costello song, like most people do. I mean, Elvis did the most recognisable version, the one people really know it from.

“But yeah, it was a nice ride. It certainly made Nick a lot of money and therefore he became my friend.” He laughs gently. “Which is really fun, to have a hero of mine, you know, be a friend as well. And so yeah, it helped him.

“He’s always said in interviews that it allowed him to make the kind of records that he wanted to make and not worry about having hits. So I like to think that in some very small way I helped to free him up to make even more great records. I’m actually cutting another Nick Lowe song on this new album from one of his albums after that.”

The album in question isn’t due out until early next year.

“I’m taking my time on this one,” smiles Stigers. “I know there aren’t too many people waking up in the middle of the night wondering where my next album is coming from, so it takes a little pressure off of me — I can take my time and put it together at my own pace.”

In the meantime there is tomorrow night to look forward to, followed on Sunday by a show at the London Palladium — again with the Ronnie Scott’s Big Band.

His Henley concert won’t all be cover versions, of course. Fans of the singer who enjoyed his 1991 breakout hit I Wonder Why are unlikely to miss out on hearing it.

“I had a nice moment there,” says Stigers of the song, which reached number five in the UK.

The singer, who is 52 and has an 18-year-old daughter with his now ex-wife, hails from Boise, Idaho, in the American northwest, but spends quite a lot of time on this side of the pond.

“To be honest, I make my living on your side of the Atlantic,” he says. “I don’t play in the States nearly as much as I do in the UK and Europe. It’s sort of always been that way. I still do a bit of touring in the States but it’s just — I go where my fans are and it tends to be in the UK and Germany and Scandinavia.

“So I do a week in the summer at Ronnie’s usually and a week around Christmas time. This summer we decided rather than doing a week with my band we’re doing a big show at the London Palladium the night after Henley.”

“We certainly will do quite a bit of material from the new album but I still do some of my hits in the more big band jazz arrangement and some other things I’ve done over the years.

“So it’s a nice combo and the Ronnie’s Scott’s band is just fabulous — it’s such an amazing band and we’ve been doing quite a few dates over the last year, year and a half.

“Ronnie Scott’s is a bit like home for me, you know? I play there a couple of times a year and so I consider myself part of the Ronnie Scott’s crew — I’m just another employee and I like it.”

• Tickets are still on sale. For more information and to book, visit www.henley-festival.co.uk or www.curtisstigers.com/tour