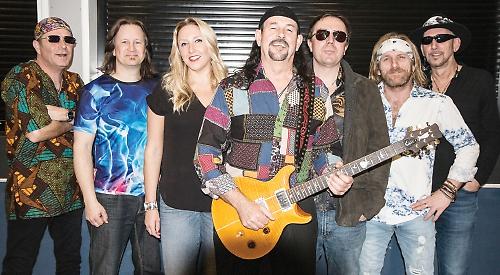 A SANTANA tribute band fronted by Sonning-based guitarist Milan Webb are celebrating after being named the winners of the 2018 National Tribute Music Awards.

The seven-piece tribute to the music of Carlos Santana were among six acts shortlisted for the title of Best Band 2018.

But their win will come as no surprise to the Latin rockers’ legion of fans, who regularly pack out venues such as Norden Farm in Maidenhead and High Wycombe’s Old Town Hall.

The band is made up of vocalists Hector Gomez and Auriol Langbridge from High Wycombe, Tilehurst-based percussionist Paul Murphy, Gez Kahan from Marlow on keyboards, Jon Quirk from Chesham on bass and Pete Lockwood from Farnham on drums.

Oye Santana also won praise for their stage show, with the judges highlighting the party atmosphere that has feet tapping and the audience up and dancing and shouting for more from the first chink of the tambourine.

“Being nominated was an honour,” said Milan Webb. “To win this accolade is nothing short of amazing.”

The band celebrated their win by making their debut appearance at the Marvellous Festival at Dinton Pastures near Wokingham last Saturday.

They are due to play the town’s Whitty Theatre on Saturday, October 6, with an appearance at Sub89 in Reading scheduled for January 18.

For more information and to book tickets, visit www.oyesantana.com

For more on the National Tribute Music Awards, visit www.nationaltributeawards.co.uk