Operatic tribute to star of stage and screen had perfect setting 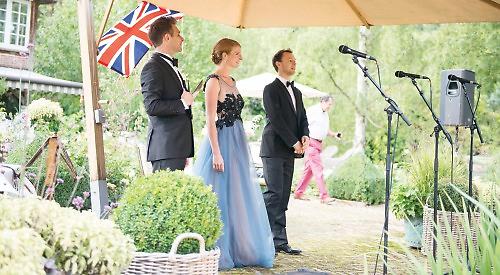 AN open-air recital performed by Opera Prelude in the grounds of Peel Fold proved to be a huge success last Friday evening.

The Fawley-based charity, which supports young, professionally-trained opera singers on the brink of their careers, couldn’t have asked for a better setting.

The beautiful quintessentially English grounds by the riverside, enhanced by the evening sun, provided a perfect complement to the nostalgic music on offer.

The recital, entitled “Thoroughly Modern Lillie”, was a tribute to the late Lady Beatrice Lillie, an award-winning star of stage and screen and former owner of Peel Fold.

Internationally renowned for her unique performances of diverse repertoire from musical theatre, revues and comedies, her final screen performance saw her starring alongside Julie Andrews as Mrs Meers in Thoroughly Modern Millie in 1967.

The programme was cleverly crafted by Opera Prelude’s founder director Fiona Hamilton, with songs linked to Lillie’s illustrious career and reflecting a rich heritage of popular music from the era of the Victorian music hall, the Twenties and Thirties and the glamour of operetta and cabaret.

The soloists, William Wallace (tenor), Ed Ballard (baritone) and Callie Gaston (soprano) proved to be excellent exponents of this lighter style of singing and transported the audience back to the early decades of the 20th century through their touching and stylish interpretations.

The first half featured British composers and began with Arthur Sullivan’s For Love Alone (The Sorcerer), a good choice for William Wallace who captured the Donizetti-like bel canto style beautifully.

We also heard Sullivan’s famous The Lost Chord delivered by Ed Ballard in suitably reverential mode. Ballard then displayed a contrasting mood in a lovely rendition of Eric Coates’s
I Heard You Singing — his sweet tone well suited to the romantic lyrics.

Wallace made the most of two simple songs — the traditional Danny Boy, enriched with dynamic contrast including a fabulous pianissimo on the final note, and Come into the Garden, Maud (from Tennyson’s love poem Maud), imbued with more than a modest amount of anticipation, much to the audience’s amusement.

Later she reinforced her talent for cabaret-style singing with Madeleine Dring’s Nightclub Proprietress and Kurt Weill’s My Ship Lady in the Dark.

The real treats, however, were the wonderful duets from West Side Story and Porgy and Bess, during which all three singers gave full rein to their operatic prowess.

A special mention must also go to accompanist Natalie Burch whose accomplished playing throughout was a joy to listen to.

The whole evening was made possible by the very kind invitation of the current owners of Peel Fold and supporters of Opera Prelude, Alan and Carol Pontin, who also chose to support two local charities, Thames Valley Adventure Playground and the Chiltern Centre for disabled children, through the recital’s proceeds.