Jazz singer Purdy and pals are back on the boat 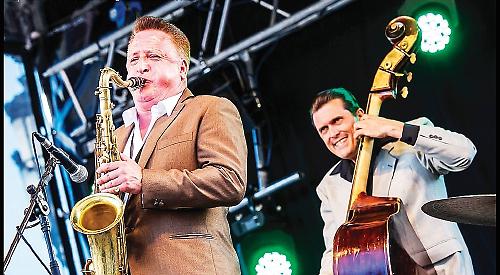 JAZZ diva Purdy famously added to Henley’s nightlife when she decided to start a monthly “pop-up” club night in the HAODS Studio next door to the Kenton Theatre in New Street.

But this summer she has been developing a taste for the great outdoors after teaming up with Hobbs of Henley.

A “Gin and Jazz Cruise” on the New Orleans earlier this month was intended to be a one-off — but proved such a success that the singer-songwriter, aka Rebecca Poole, who grew up on the Joyce Grove estate in Nettlebed, has been asked to do an encore.

This will see Purdy and her band take to the River Thames again next Friday (August 31) — with the cruise effectively replacing her September club night.

However, fans of the intimate New Street venue who join the cruise will be able to gain a sneak preview of Purdy’s October and November pop-ups — as her special guests aboard the New Orleans will be Ray Gelato and Liane Carroll, who are due to visit Henley again on October 6 and November 3 respectively.

Looking ahead to the club nights, Purdy said: “We are incredibly excited to welcome swing legend Ray Gelato to the club. Ray Gelato and the Giants continue to work packed rooms, concerts and festivals and enjoy repeat sold-out bookings at the world-famous Ronnie Scott’s Jazz Club in London and the Blue Note in Milan.

“Ray has played with Sir Paul McCartney, twice appeared before Her Majesty the Queen, and supported Robbie Williams at the Royal Albert Hall. The band has 10 albums to their name and continue to work at sold-out venues all over the world.”

Welcoming her other guest, she added: “Liane Carroll has been a pillar of the British jazz and soul scene for over 35 years.

“From the beginning of her musical career aged 15 she has dedicated her life to creating a deep and abiding connection with audiences all over the world through her exceptional talent, versatility and ability to truly interpret a song.

“Along the way she has collaborated with such diverse artists as Sir Paul McCartney, Gerry Rafferty, Long John Baldry, Ian Shaw, Claire Martin and drum and bass outfit Elektricity, with whom she headlined Finsbury Park’s 2016 Hospital in the Park Festival, appearing with them again at Glastonbury the following year.”

Tickets for the cruise, which is boarding at 7pm next Friday, are priced £47.50 and in addition to the music include a Mr Hobbs G&T on arrival and a finger buffet — with a cash bar available on board for the purchase of drinks.