Folk ‘besties’ are going live with a long-awaited album 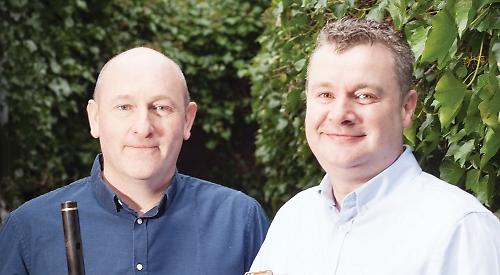 TWO Manchester musicians who have been best friends since childhood are bringing their first album together to Nettlebed village club on Monday (September 10).

Mike McGoldrick and Dezi Donnelly’s album Dog in the Fog was released in July on Boxroom Records.

With Mike on flute and Dezi on uilleann pipes, the studio collaboration was something the pair had had in mind for many years.

Dezi said: “Finally we got around to doing this after a long time. One of the few times in life when no words need to be spoken is when playing music with Mike. There’s communication, humour, love, history, character, respect and attention to detail. I suppose the most important thing though is fun and the everlasting smile on the inside when it’s happening — because it just feels so right.”

Mike added: ‘I’ve enjoyed recording this album immensely, especially the tracks on which Dezi has tuned the fiddle down a tone to C and I’m playing the low C flute which makes you want to play at a slower pace. It reminds me of my East Galway roots and the steady music from there.”