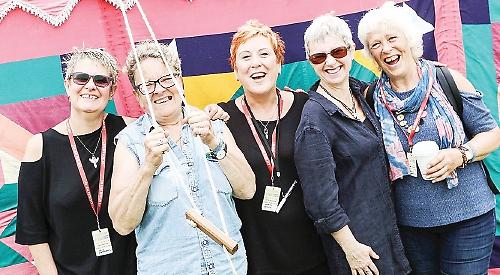 THE folk scene’s equivalent of the Spice Girls are playing Nettlebed village club on Monday night.

Back in 1995, five of the finest folk, blues and soul singers of their generation found themselves performing on the same bill at the Cambridge Festival.

Magic happened and Daphne’s Flight — as they decided to call themselves — took off.

A widely acclaimed UK tour and a prestigious date at London’s Union Chapel soon followed. The project has been seen as marking a turning point in the role of women within the English folk movement.

More than two decades on, and following the release of their critically acclaimed album Knows Time, Knows Change last year, the five-piece are embarked on a September-long tour of the UK.

Their repertoire crosses a huge range of topics and genres — blending folk, blues, jazz and pop, while also dipping into new and vibrant arrangements of classic songs like Elvis Costello’s Shipbuilding.

All are woven together with striking harmonies and supported by a range of instrumentation and percussion.

The following week (September 24) will see the return to Nettlebed of folk club patron Phil Beer and his band.

Mr Sanderson added: “Best known as one half of Show of Hands, our patron, Phil is touring his band again — vocals, fiddle, mandolin, guitar, melodeon, bass and drums.

“Described by the Guardian as ‘where Steve Earle and Richard Thompson collide’ an evening with The Phil Beer Band is fast, frenetic, feel-good and leavened with a good helping of humour.”

For more information or to book, call the box office on 01628 636620 or visit www.nettlebedfolkclub.co.uk