Musical really does feel like ‘the greatest story ever told’ 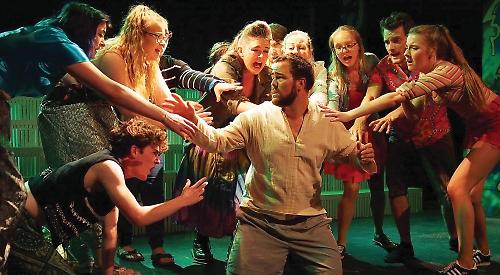 MUSICALS are rare at Progress, so I felt really excited to be in the audience for Jesus Christ Superstar.

This modern classic by Tim Rice and Andrew Lloyd Webber demands a lot from the production team and the Progress crew has nailed it.

There’s an effective and flexible set, with wall graffiti signalling both the fandom and scorn to be played out on stage.

The innovative lighting stresses the conflict between light and dark, suggesting the tussle between competing views, while the snazzy costumes have an emphasis on red to hint at the bloodshed to come.

The choreography is accomplished, the dancing full of verve, there’s live music and, most importantly, some very strong voices, rehearsed to a high standard by Jane Southern.

All these elements have been expertly orchestrated in Andy Camichel’s stunning production.

The life of Jesus Christ has been called “the greatest story ever told” and is the foundation of Christianity. The narrative was turned into this musical in the early Seventies and the Superstar story continues to resonate — not least because it explores how reputations are made and destroyed and the role of the mob in making or breaking someone.

Jamie Trick’s Jesus is, rightly, the star of the show. Clearly a troubled soul, he enjoys his early success amongst followers, but things turn sour and Trick powerfully vents his anger at those who disappoint him and also at God.

Russell Barrett, Christian Reddington and Eve MacDonald form the sinister trio of priests who see Jesus as a rabble-rouser and a threat. Megan Turnell is magnificent as Simon Zealotes, trying to whip Jesus up to greater ambition. Ciara Roddy plays a convincing Mary Magdalene, who remains loyal and supportive to Jesus and delivers her two big songs — “Everything’s All Right” and “I Don’t Know How to Love Him” — with confidence and compassion. Jake Willett’s spiky and conflicted Judas shows us a whole range of emotions, including confusion, regret and fear — but Jesus is also let down by the irresolute Peter (Matthew Jacobs). Oliver Godfrey plays Pontius Pilate with suitable gravitas and detachment.

A show-stopping moment is when the very accomplished Thomas Hegarty treats the audience to Herod’s mocking song in full camp comic splendour.

These strong performances are backed by superb singing and dancing from the ensemble.

The finale, which requires Jamie Trick as Christ to drag a full-sized cross on to the stage for his own execution, is indescribably moving. To witness a simulated crucifixion in the close quarters of the Progress auditorium is uncomfortable to say the least.

This drama of many moods — exuberance, sadness, conflict — is staged with staggering intensity, but also with all the pizazz of a polished musical. This is a five-star show in every way. See it!