Youth’s triumph over tyranny needed to keep up the pace 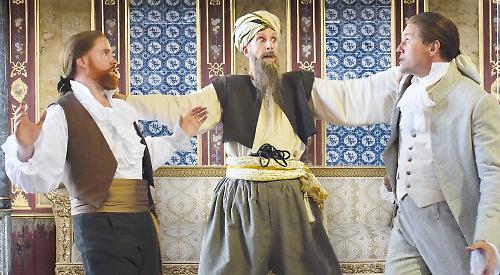 Previous triumphs by Diva Opera at this intimate venue prepared me for a rollicking good evening of entertainment.

Spanish noblewoman Konstanze and her maid Blonde are rescued from a Turkish harem by Belmonte and his manservant Pedrillo. The main obstacle is the keeper of the harem, Osmin. They achieve access by lacing his drink with a sleeping potion.

There were some good musical performances. Gabriella Cassidy as Konstanze and Matthew Hargreaves as Osmin both managed the broad vocal range in two of the most demanding roles in the classical repertoire.

But it was the two newcomers who stole the show. Barbara Cole Walton for her vivacious character performance as Blonde and some of the best singing of the night from the baritone John Porter as Pedrillo.

Music director and pianist Bryan Evans’s excellent accompaniment at the grand piano was brisk and unwavering.

Though well sung, the action, disappointingly, was often slow and lacklustre. I missed the fast-paced comic action and development of the character parts one would expect from this entertaining opera, and this was reflected by the few laughs and muted applause, even after the big arias.

The cast did their best with the limitations of the performance space. With the challenge of an audience seated at opposite sides of the stage other operas might be better suited to this venue.

Inevitably, some of the sound in the arias was lost when the solo singers had their backs to us, and it was only during the duets and the quartet that the audience could be engaged with the action at every moment.

High points were the farcical duet “Vivat Bacchus” where Pedrillo coaxes Osmin to drink the sleeping potion to gain access to the harem. Also, the lively quartet at the end of act two where the two pairs of lovers are reunited, squabble about fidelity and make up — all in one magnificent piece of musical writing.