Inebriated hunter used every trick in the horn player’s book 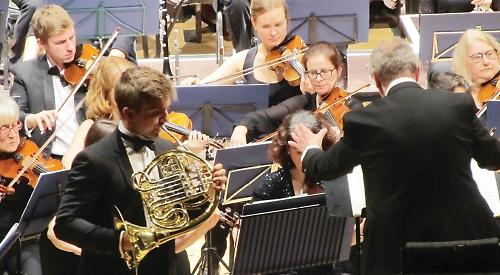 FOR their annual visit to Reading’s Concert Hall the Henley Symphony Orchestra chose to start their programme with the rarely performed overture to Robert Schumann’s Manfred.

This was a slightly odd starting choice — being the tragic, sole remnant of Schumann’s failed attempt to make his mark on the music drama genre. But the work was well crafted and the orchestra brought out the best in it.

In a week when the newspapers were reporting the impending demise of the French horn due to the tendency among young people to take up the ukulele instead, it was refreshing to hear just what a magnificent instrument the horn can be in the hands of an expert.

The French horn is notorious for being one of the hardest wind instruments to play, but the young virtuoso Ben Goldscheider lost no time in reminding us of its warm seductive tone and astonishing versatility.

Richard Strauss’s Horn Concerto No 2 places considerable demands on the soloist and on the orchestra. Both rose to the occasion to give us a most exhilarating performance. All the intricate interplay between the horn soloist and orchestral soloists was executed with immaculate precision. Towards the end, as if to remind us of role of the horn as an essential orchestral instrument, the score dictates that the soloist be joined by the orchestra’s horn section in a stirring chorus of triumph. This was done with enthusiasm and style.

To the audience’s delight Ben Goldscheider returned to the stage after the interval to play Gilbert Vinter’s Hunter’s Moon, a light-hearted portrayal by horn and orchestra of an inebriated huntsman.

This was a last-minute addition to the published programme and called upon the performer to use every trick in the horn player’s extensive book of special effects in order to illustrate the huntsman’s comic adventures. The ukulele has no answer to this!

The concert ended with a tendentious performance of Sibelius’s Symphony No 1. From the outset it was not clear if the interpretation was to be “warm” or “cold”, triumphant or ominous.

It ended up sounding anxious, with many unstable linking passages and uneven balance across the orchestral sections. The finale climaxed too early and became a battleground in which walls of sound from brass and woodwind submerged any contribution from the strings.

Modern interpretations of this work often use slower metronome markings than those given by Sibelius. A steadier tempo would have helped the woodwind and strings, particularly in the third movement where little scurrying and contrapuntal phrases are thrown around by Sibelius with gay abandon and are difficult to synchronise precisely.

The symphony was a scrambled end to an otherwise exceptionally rewarding concert.