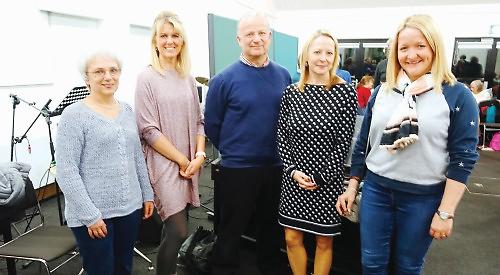 A family Christmas concert at 2.30pm will be followed at 7pm by “A Ceremony of Carols”.

Both concerts will feature choral Christmas works by Benjamin Britten, accompanied by the acclaimed harpist Mary Reid, who will also perform harp solos with a seasonal theme during the afternoon and evening events.

A spokesman for Henley Choral Society said: “Mary Reid is not to be missed, with her passion for giving recitals that showcase the harp’s full potential. She performs as a soloist, chamber musician, and orchestral harpist. Her recent performances have been with the Royal Opera House, including the Ring Cycle this year, Opera North, the Hallé, London Mozart Players, English Touring Opera, the City of Birmingham Symphony Orchestra, Northern Ballet, the Royal Scottish National Orchestra at the Edinburgh International Festival and at the BBC Proms.”

The spokesman added: “An exciting young conductor, composer and performer, Jessica started with the junior and senior youth choirs in September and is looking forward to leading the choirs as they perform Britten’s A New Year Carol and the traditional I Saw Three Ships, as well as a host of other beautiful Christmas works, always sung exquisitely by the children.”

Ms Norton said: “My first term with the Henley Youth Choirs has been filled with laughter, hard work and fantastic music. It is such a privilege to work with young people who put their all into singing and derive so much enjoyment from it. I am thoroughly looking forward to our first performance together — particularly showcasing the variety of styles we have tackled in the last month.”

As the title indicates, the 7pm concert conducted by Henley Choral Society musical director Peter Asprey will showcase Britten’s A Ceremony of Carols.

Mr Asprey said: “It is difficult to imagine that Benjamin Britten’s A Ceremony of Carols was composed in a hot, stifling cabin of a cargo vessel as he returned to England from the United States in the spring of 1942. The work was written by Britten, as he put it, ‘to alleviate the boredom’ of the journey! In truth, the journey was probably anything but dull and, in fact, quite dangerous, as their ship had to navigate the Atlantic full of German U-boats. Having arrived safely back in England, Britten made one or two additions to his collection before the work was premiered at the Wigmore Hall in December, 1943. Britten conducted the premiere himself. I hope you enjoy Henley Choral Society’s production of this varied and exceptional Christmas classic.”

Henley Choral Society chair Susan Edwards said: “Peter has put together a magical programme of concerts that will leave you tingling and excited for the Christmas season. I am particularly thrilled to have the harp accompanying both choirs, as well as talented soloists who have been drawn from our soprano, alto and tenor sections.

“I am really looking forward to the afternoon family concert as this is the first concert for Jessica Norton as the youth choir’s musical director. She has been enjoying preparing both the junior and senior youth choirs for Christmas and the children are always the stars of the show. I would urge everyone to get their tickets as they are selling fast.”

For more information and to book, call 07946 782502 or visit www.henleychoralsociety.org.uk

To purchase tickets in person, call in to Gorvett & Stone at 21 Duke Street, Henley.

n LOOKING ahead to the New Year, if you enjoy singing and would like to try singing with the choir, Henley Choral Society is hosting a “Come and sing Handel’s Messiah” event on Saturday, January 19, from 9.30am to 1pm, at the Christ Church Centre in Reading Road, to which all are welcome. For more information and to book tickets, priced £10, visit www.henleychoralsociety.org.uk