Rewind festival told it can only grow a little 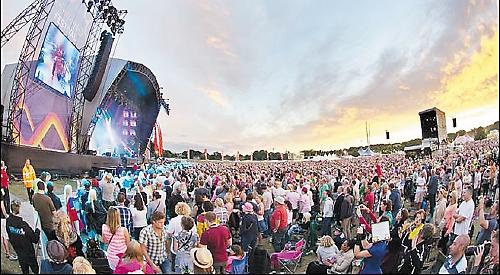 A MUSIC festival held near Henley every year has been given permission to expand but not as much as organisers wanted.

Rewind South, which is held on Temple Island Meadows in Remenham over a weekend in August, wanted to gradually increase the audience capacity from 20,000 to 30,000 a day by the year 2022.

But Wokingham Borough Council’s licensing panel decided that the festival would only be allowed to admit a maxium of 23,000 people, starting this year.

It was given permission to begin the festival early on the Friday this year at 11am rather than 6pm, as has happened in previous years.

Organisers will be permitted to play recorded music and serve late-night refreshments at the campsite bar until 1am instead of 3am, which had been requested.

Broadwick Live said it wanted to cause “as little negative impact to neighbours as possible”.

But residents of Remenham were concerned about the extra traffic and disruption coming only weeks after Henley Royal Regatta and the Henley Festival, which both last five days.

John Halsall, who represents Remenham on the council, said: “We’re absolutely delighted that the licensing panel took the concerns of the residents seriously and conditioned the licence.

“Remenham is used extensively during the course of the year and the proposal was just a proposal too far. We asked the borough council to keep it as it is and that’s pretty much what they have done.

“I think Rewind is as big as it should get in Remenham. If they want to get bigger they should find a site that’s better served by communications and roads.”

Mike Dudley, of Remenham Farm Residents’ Association, which also objected, said: “I think Wokingham Borough Council was equally unhappy with the decision to take it to 30,000 and we weren’t alone in saying that was too much.

“We would have preferred no increase but Wokingham has said ‘23,000 is what we’re going to impose’ and we have to live with that.

“I wouldn’t say it’s either acceptable or manageable — it will be noticeable. It’s busy and it’s going to be even more busy.

“Each time it’s bringing more traffic and more people into a very limited area. It’s not just Rewind, all the other events as well.”

Rewind Festival director Joe Drape said: “My business is delivering festivals across the UK. We have an interest in making sure Rewind is here for years to come. What we have demonstrated is that we can improve the issues around traffic.”

The application was supported by the Culden Faw Estate, boat hire firm Hobbs of Henley, the official river taxi provider, SRB Boat Hire/Moorings and Henley Charter and the Copas Partnership, which owns the land.

The festival, which features Eighties pop stars, began in 2009 and usually sells out. This year’s event will take place from Friday to Sunday, August 16 to 18.