Rarely performed opera is so rich it needs three viewings! 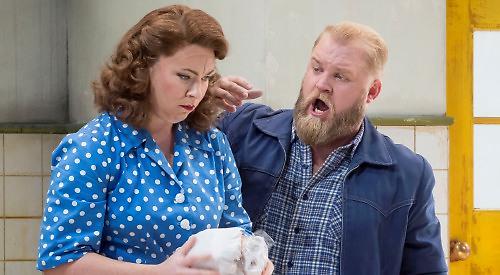 GARSINGTON Opera, in its 30th anniversary year, presents one of its most thrilling productions yet.

Smetana’s The Bartered Bride, with its rich musical score soaked in Czech folk rhythm, is sheer genius — and you are left astounded that this opera is so rarely performed.

At the illuminating
pre-performance talk on Friday, musical director Jac van Steen recommended that you see this production three times because there is so much to look at. He wasn’t wrong, either.

Director Paul Curran has managed to get his fabulous cast to sing, act and dance all at the same time with sparkling energy — superb solo singers and an extraordinary chorus of 26 individual characters who spend much of the show on stage.

Sung in the original Czech, I wasn’t sure how it would work — swapping the traditional bohemian rural setting for a Fifties English village hall. But this was a masterstroke.

With its peeling wallpaper and cluttered adjoining kitchen, the familiarity and attention to detail draws the Garsington audience in and we get the comedy from the word go.

In fact, the show begins as a comedy sketch. The vicar has some trouble plugging in his turntable. He struggles to remove a record from its sleeve. As the stylus eventually goes down, the Philharmonia Orchestra bursts in with explosive energy, taking the famous overture at a rollicking pace.

Every bar dances off the page, and while the fast rhythmic passages play through the opening chorus we are introduced to the characters on stage — the head of the WI making her Victoria sponge, the amiable but smelly pig farmer, the teddy boys loving Elvis. Fabulous!

The Bartered Bride has all the elements of comic opera with lovers torn apart, mistaken identity and general confusion before all is resolved.

But this production really has it all — a circus troupe performing astonishing feats, a stuttering fool in a bear costume and a very slick scene change by members of the chorus.

The dance sections somehow manage to pull off the jive, the twist, the waltz and polka to the Czech score. Curran, himself a former ballet dancer and choreographer, has done a good job here.

There is some strong, secure singing from the solo parts. Welsh soprano Natalya Romaniw’s Marenka is at once the resolute and determined heroine but is also warm and sympathetic.

American-born tenor Brenden Gunnell as her lover Jenik has a fine, effortless delivery.

Bass Joshua Bloom gives a convincing comic performance as Kecal, the villainous marriage-broker, milking his descending scales to the very bottom of the register.

There is a superb soprano aria in act three, but otherwise the duets and ensemble sections are the most enjoyable.

Grab any remaining tickets, you can find — there are seven more performances until June 30.