Chief executive quits for new job on eve of festival 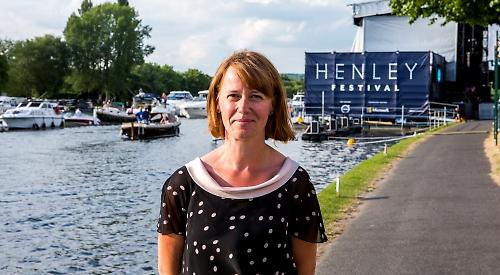 THE chief executive of the Henley Festival is stepping down after five years to take up a new job.

Charlotte Geeves will oversee her last festival in two weeks’ time and will leave at the end of August.

She will be replaced for an interim period by head of marketing Jo Bausor and Jeremy Millins, who is in charge of the festival’s catering, as joint interim managing directors.

She said: “I was approached about the job at a time when I wasn’t looking to leave but when I met them to chat about it and the more I spoke to them, the more interested I became.

“These types of job only come up every 10 years or so and, although it has come a lot sooner that I thought it would, it was too good an opportunity to pass up.

“With these roles you are expected to stay a minimum of five years and, if you are doing well, this may be extended for another five years before fresh ideas are needed.

“I spent the first 14 years of my career in the theatre and the last 11 in festivals and my heart sits in both places.

“The Old Vic is a beautiful old theatre and in 2018 it had an enormous capital investment to develop it for the long term and it was developed on time and on budget.

“Now there is an opportunity to take the building on to its next phase and my role will lead on fund-raising and marketing while working on its engagement programme and with the finance team while running the organisation.

“A lot of this work I have also done here at the Henley Festival where part of my job is to try to stabilise and diversify audiences.”

When Ms Geeves succeeded Gill Mitchell in the role in 2014 she talked about trying to sell out each of the five nights of the music and arts festival.

While she has not achieved this, she said she was still happy with her achievements.

Ms Geeves said: “I think we have developed the artistic programme across the board over the last five years so that it is broader and richer.

“At the same time I looked at the ticketing structure and have made it more accessible in terms of price with the introduction of general admission tickets.

“The audience grew 40 per cent in the first year and this has been maintained in a period of great economic uncertainty.

“We have also diversified our audience with the family fun day on the Sunday by giving parents and children the opportunity to come during the day.

“Tickets were £35 in 2015 and they are still £35 and that’s for five people with at least one of these being a child. I want to get as many children and people to see as much art as possible in the broadest possible sense.

“I still want five nights sold out and that is something the festival will continue to strive for every single year.

“I think we have done incredibly well to maintain our audience because when you look across the festival industry you see that others are struggling to maintain their numbers.

“Perhaps this is down to the economy or perhaps there are too many festivals. Where we have maintained ours, I am really proud.”

Ms Geeves, who lives in Henley with husband Chris Barker, a gardener, and their son Henry, five, said she was also pleased with the way the festival had supported its chosen charities and promoted its work as a charitable trust.

She said: “We have really embedded the way that we work with charities into our business plan, which I wrote in 2017. We have a clearer strategy in how we work with them.

“The Charlie Waller Memorial Trust and the Teenage Wilderness Trust are excellent charities and I am especially proud of the work we do supporting them.

“We are now recognised and well known for the work that we do with the charities. We ourselves are a charity and we are much better known for this than we were five years ago, although that work never stops.”

This year, the festival is ditching single-use plastic glasses and replacing tens of thousands of containers with fully recyclable alternatives.

There will also be new recyclable food containers and schemes to recycle water and energy used at the site.

Ms Geeves said: “We see shy of 30,000 people coming through our doors over the five days and we have a responsibility to lead the charge in terms of what festivals should be doing and I am really proud of what we are doing here.”

She added: “I have loved my job here and greatly enjoyed working with the team and it would be brilliant to come as a punter.”

Lord Carter, chairman of the Henley Festival, said: “Charlotte will be leaving the festival much improved and with a clear forward plan.

“We are grateful for the hard work she has put in over the last five years and wish her well with her new venture.

“The board will work closely with the strong team that Charlotte has built as we search for a long-term chief executive officer for the Henley Festival.”

Miss Geeves was previously director of the biennial Wildscreen wildlife film festival in Bristol and was company manager at the Globe Theatre in London for two seasons as well as at the Young Vic and project manager at Sadler’s Wells.