All the pleasures — and no lack of musical highlights 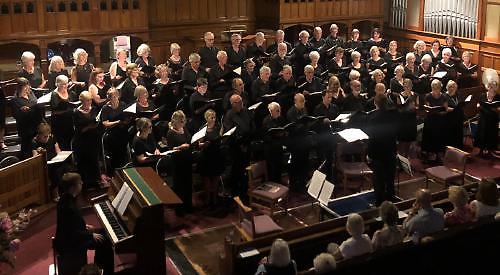 THERE were many highlights when the Henley Choral Society under their musical director Peter Asprey regaled a packed audience with an eclectic two-hour programme of choral and instrumental music spanning three centuries.

The evening began with what was essentially a history lesson of English vocal music delivered by Peter Asprey that led us to a performance of Purcell’s Welcome to all the pleasures, an ode for St Cecilia’s Day.

Seventeenth century songs by Dowland and Purcell with piano accompaniment were contributed by Valentine Ford, a previous member of the choir making a very welcome return in a new and very convincing role as a professional soloist.

She was partnered by the society’s resident accompanist David Smith, who contributed two virtuoso pieces on his own behalf in the second part of the programme.

The Bell Quartet, four talented instrumentalists from The Royal Academy of Music, formed their ensemble recently as a permanent professional undertaking.

They lost no time in establishing their credentials with William Byrd’s Ave Verum Corpus in a convincing arrangement for string quartet.

Another unusual contribution by the quartet to the first half of the programme was a lively and witty performance of La Oración del Torero by Joaquin Turina that clearly went down particularly well with the audience.

The choir was involved too and contributed attractive works by Thomas Campion, CHH Parry and John Farmer.

They ended the first half of the programme with a rousing rendition of Now is the Month of Maying by Henry Purcell.

The choir sang this piece from memory with infectious enthusiasm and perfect clarity of diction. This was in sharp contrast to some of their other contributions where an occasional quick glance at the conductor over their music scores was not always adequate to ensure clarity of word beginnings and unanimity of phrase endings.

After an interval involving substantial liquid refreshment and interesting titbits, Valentine Ford and the string quartet gave an elegant performance of Retire My Soul by William Byrd.

The most emotive offering of the evening was Stanford’s The Bluebird, sung immaculately and with immense charm by Valentine Ford from the pulpit with the choir below contributing a luscious warm effect achieved by having perfect balance across the voices. This performance really touched the hearts of the audience.

The Bell Quartet ended their contribution to the programme with a flourish by playing an entertaining piece of traditional Danish music, Ribers No 8 “SterrandsRand”, that was a convincing and much applauded display of their exceptional collective talent.

This varied and entertaining concert ended with Elgar’s six choral songs, From The Bavarian Highlands. This is a substantial work in six movements with piano accompaniment that the choir attacked with gusto.