Nerve-shredding ghost story has a dark beauty all its own 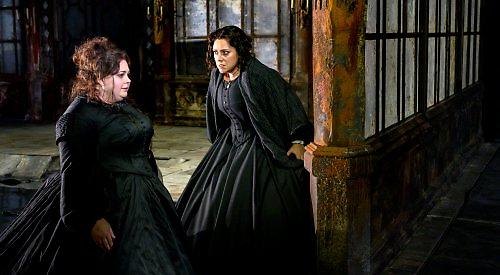 The Turn of the Screw | Garsington Opera at Wormsley | Thursday, July 4

THE Turn of the Screw is a harrowing tale, originally written in the form of a novella by Henry James that was cleverly reworked for the operatic stage by Benjamin Britten with a libretto written by Myfanwy Piper. The Garsington Opera production is directed by Louisa Muller.

Britten’s mastery of musical form and orchestration broke new ground when he composed this opera in 1954.

The whole work is based on a 12-tone theme followed by 16 variations, one for each scene of the opera.

Written for a chamber orchestra of only 13 players, here conducted by Richard Farnes, the music is colourful, evocative and wonderfully supportive of the action occurring on the stage.

The opera has a cast of only six people, two of them children, so the vocal demands placed on all of them were challenging and consistently met. Their immaculate performance was utterly absorbing.

The original story, based in the 19th century, is told through the eyes of a young, inexperienced governess put in charge of two orphaned children, Flora and Miles, living on a remote country estate in the care of their attentive housekeeper Mrs Grose.

The ingenious set portrays a large mansion with huge glass windows through which unworldly apparitions can be seen lurking.

Self-opening doors add to the ghostly atmosphere. On one side there is a lake, filled with water.

No sooner has the governess taken up her new post than a letter arrives from Miles’s school stating that he has been expelled, for reasons unknown. Then the governess discovers that the house is being haunted by Peter Quint, a disgraced valet, recently deceased, who seems to have developed some sort of hold over Miles.

As if one ghost isn’t enough, the children’s previous governess, Miss Jessel, who had drowned in the lake, emerges from the latter and clearly has designs on Flora.

The governess confides her fears of the unknown to Mrs Grose. Together they do their best to protect the children but with increasing difficulty as the ghosts strive to take total control of them. Finally, Mrs Grose saves Flora by taking her away completely from the estate. But Miles, cursing Peter Quint as the devil, falls lifeless into the arms of the governess.

That is where Henry James’s original story ends but, in Garsington’s excellent production, the governess leaves Miles’s body and walks slowly into the lake, her crinoline ballooning around her as darkness descends.

Every good opera should have at least one musical number that is memorable and hummable by the audience. In this opera it is the sad little song Malo that Miles sings to divert attention away from himself.

The performance left a lasting impression. As I walked away from the auditorium, looking out across the beautiful Wormsley Estate I could see the lake in the deer park and thought I heard the plaintive song Malo coming back to me — only in my imagination of course!