Slalom between the silly and the serious proves a rare treat 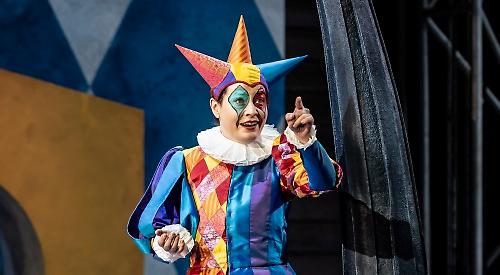 THE annual Garsington Opera season continues to take place in the wonderful setting of Wormsley Park, allowing music lovers to mingle and picnic in the magnificent grounds and enjoy an evening of exhilarating operatic entertainment.

As well as putting on well known operas, Garsington has always included more unusual pieces as part of its programming, and this year is no exception.

There is a real — and rare — treat on offer in the British staged premiere of Fantasio by Jacques Offenbach (born 200 years ago this year), wittily directed by Martin Duncan.

Sung in a new English translation by Jeremy Sams (with surtitles which were hardly necessary with such excellent diction by both cast and chorus), Fantasio proved to be a remarkably enjoyable operetta — think Pierrot crossed with a French version of Gilbert & Sullivan (indeed, WS Gilbert was a big fan of Offenbach).

The plot includes plenty of the usual operatic silliness, however there is an underlying theme of real seriousness — should the princess wed the foreign prince to prevent war, or be free to marry for love?

Providing the balance between the melodrama and the fun required great comic timing, and it was clear the cast were making the most of this — backed up by the excellent chorus.

Fantasio himself — student, dreamer, debtor, who steps into the vacant position of court jester and finally proves key to resolving the drama — is a “trouser role” and was sung by mezzo Hanna Hipp.

The King of Bavaria (Graeme Broadbent) the Prince of Mantua (Huw Montague Rendall) and his aide-de-camp Marinoni (Timothy Robinson) proved that, despite their clear failings, tricky disputes between European neighbours could be sensibly resolved...

As always with Offenbach, the music, conducted by Justin Doyle, flowed deftly from the overture and throughout.

Offenbach frequently highlights the cello; Fantasio proved no exception, and there were several beautiful “cello moments”, while overall the orchestra accompanied the singers with distinction.

It will be interesting to see if this new production inspires other opera companies to add Fantasio to their repertoire in future.

But in the meantime, there are a few more opportunities to catch it at this year’s Garsington Opera at Wormsley Park, which continues throughout much of July.