Circus is in town... and it’s spreading the love 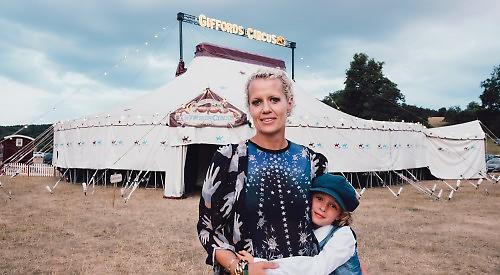 HUGH Grant called it “the most fun you can have in a tent” and celebrity fans include the likes of Jennifer Saunders, Adrian Edmondson, Helena Bonham-Carter and Vivienne Westwood.

But as of yesterday (Thursday), it is in residence at Stonor Park until Monday (July 29).

Xanadu takes its name from Samuel Taylor Coleridge’s famous romantic poem “Kubla Khan”, where Xanadu is a mythical garden of bliss where anything can happen.

The poem dates from 1797 and was first published in 1816, but Giffords’ creative team have taken this inspiration and turned their tent into a Summer of Love-style garden of joy, freedom and flowers.

Director Cal McCrystal said: “Picture the scene — it’s 1973 in Hyde Park, London, and the flower power movement is at its height.

“Hippies, hipsters, rock stars, musicians, wild women and global nomads with shamanic horses gather to play, sing, dance, protest and perform. Policemen and a family of out-of-towners get caught up in the celebrations. Will they get in the groove?

“Nell Gifford builds a pleasure dome and Tweedy the Clown has a job in the kitchen because he thought everyone was talking about ‘flour power’.

“As evening approaches, the ever more chaotic event careers towards a joyful, transcendental finale. Be there or be square!” The show’s “pleasure dome” has been created by acclaimed production designer Takis and draws heavily on both Sixties and Seventies influences — something that also feeds through into the show’s soundtrack, as performed by a live band throughout.

A Giffords spokesman added: “The music is hypnotic and exciting and acts as a device to lure the audience into the show. The finale is a psychedelic spectacle and will have everyone dancing in the ring in true Giffords tradition.

“Xanadu is a welcome and clever distraction to a political backdrop of unease in the UK and provides audiences with an opportunity to forget their everyday troubles, which is the true ethos of circus.”

Cal McCrystal, whose other credits include One Man, Two Guvnors and both Paddington films, added: “I’ve wanted for a while to put on stage the love that our circus community has for each other.

“Xanadu is one big party and we want audiences to engage with their inner hippie and be wowed by the amazing feats of human strength and achievement and be part of something really special.”

Acts to look out for this year include Lil Rice, the niece of circus founder Nell Gifford, who is making her solo debut with a cyr wheel act that promises to leave audiences open-mouthed.

Show times for Xanadu range from 11am to 7.30pm, with ticket prices starting at £10 for children and £15 for adults.

For more information and to book, visit www.giffordscircus.com or call 01242 691181. For details of forthcoming events at Stonor Park, visit www.stonor.com