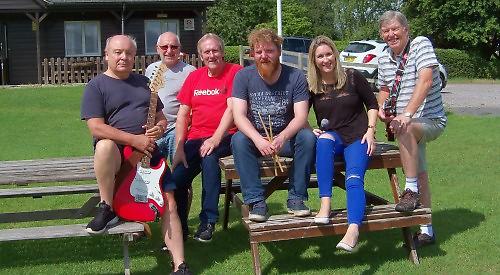 STOKE ROW has played host to some of the world’s greatest rockstars over the years — George Harrison, Bob Dylan and their friends had been known to sample the waters at the Crooked Billet.

So the Cherry Tree pub up the road is getting in on the act with its own homegrown band, Busted Flush. They play the Cherry Tree garden on Monday (August 26) from 2pm to 4.30pm.

Four of the band are from the village, including the drummer Grant Salmon, who lives and works in the pub. The band came together when another musician from Stoke Row, Eddie Agar, linked the two guitarist-singers together in the spring.

One of those players, Mike Rowbottom, who has lived in the village for 33 years, said: “We’d sort of met before but Eddie thought we might make a good combination. So we got together and tried a few songs and we found we blended really well.”

The other guitarist, Geoff Foster, has lived there for 38 years and has been playing in bands since he was 16. They invited bassist Andy Malnick, from Wallingford, who was a jobbing musician until 40 years ago then picked up the instrument again a few months ago to play in the Wallingford Corn Exchange Pantomime Band.

Mike said: “We thought he might enjoy some classic rock after that and he jumped in with both feet first.”

Drummer Grant trained with the Academy For Contemporary Music in Guildford. Mike said: “He heard us play when we were at the pub in April and asked if he could sit in for this session. We didn’t need to be asked twice and he’s slotted right in.”

John Campbell has played with Geoff in the past and comes from Tilehurst. He plays keyboards in the band but has a degree in music from Durham University and Mike says everyone’s in awe of him.

The band is completed for this one-off gig by guest vocals from Geoff’s daughter, Lyndsay, who’s home from Dubai for a few weeks. She trained as a singer and musician and sang with her father’s band for many years.

Mike said: “The only one without any pedigree at all in this band is me. “I’ve been playing for 53 years and ran it as a parallel life to my career. Here we get to play some of the greats like the Eagles, Stones, Santana and Lynyrd Skynyrd. We’re going to have fun so we hope the weather stays right for it.”