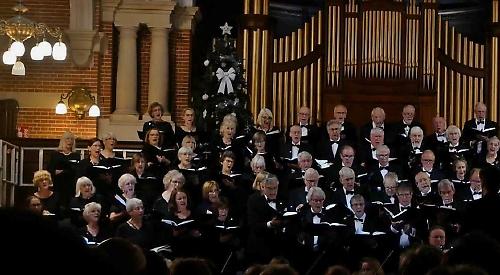 HANDEL’S oratorio Messiah is one of the greatest choral masterpieces ever composed. Written in English it is easily accessible to even the untrained ear.

Much of its popularity can be ascribed to its abundance of memorable melodies, its sincerity, and the deceptive simplicity and clarity of its part writing. But it was the latter that led to the partial undoing of this performance given by the South Chiltern Choral Society in Reading University’s Great Hall.

So what went well?

Through no fault of their own they sang the first half of the programme backlit, appearing like ghosts to rise from the dead with no visible facial features. Most disconcerting.

Better lighting was provided after the interval and we could fully appreciate their warmth and passion for the music.

The small orchestra, led by Kate Bailey, was configured much as Handel originally specified, well balanced and playing cleanly and supportively. The two famous trumpet solos were played exceptionally well — crisp, bright, but not forced, and with impeccable timing.

Handel’s choral writing is a model of transparency, allowing all four sections of the choir to be heard equally as strands of melody interlock and then go their separate ways.

The choir was commendably well balanced across its four sections, even allowing for the small number of tenor voices compared with the other parts.

So, apart from the unfortunate lighting, what went wrong?

For much of the time the sections of the choir were not singing together. All eyes were on the conductor for the first two bars of each number, after which they switched en masse to study their scores; thereafter each person was taking their beat aurally from the person next to them rather than visually from the conductor.

As soon as one of the parts encountered a repetitive dotted rhythm or a sequence of running semiquavers it took less than 10 bars for that part to diverge significantly from the others, leading to very muddy counterpoint and, once, even threatening to bring the movement to a premature end.

The words of item 26 on the programme — “All we like sheep have gone astray” — seemed particularly apt on this occasion.

The extent of this problem was emphasised by the good synchronisation between the parts in the Hallelujah Chorus and The Trumpet Shall Sound.

The full audience played their part and, as tradition demands, stood for the Hallelujah Chorus.

Handel’s Messiah is a truly great work that is a joy to sing and play; but it is no pushover.