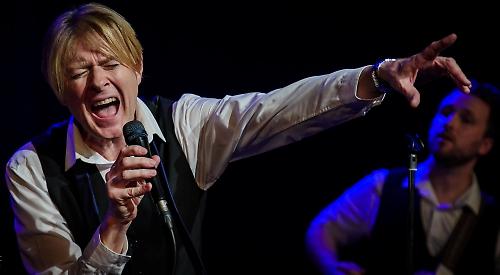 WHEN David Bowie died in January 2016, the world lost one of its greatest musical and cultural figures.

But as with the likes of Elvis, the Beatles and Pink Floyd, Bowie’s legacy continues to be buttressed by a number of professional tribute artists who tour the country performing his music live on stage.

In 2016, the year of Bowie’s death, Paul Antony was voted the UK’s number one Bowie act at the National Tribute Awards.

Now he and his band are bringing their “Pop Up Bowie” show to the Kenton Theatre next Saturday (January 18).

A spokesman for the New Street venue said: “With a full band Paul will perform two hours of Bowie’s biggest hits, taking the audience on a musical journey, experiencing the masterpieces that made Bowie the legend he is today. Pop Up Bowie aims to inspire, uplift and celebrate the life of a true artistic genius.”

With a setlist of around 30 songs, favourites that Bowie fans can expect to hear on the night include Space Oddity, Suffragette City, Young Americans, Heroes, Let’s Dance, Moonage Daydream, China Girl, Fame, Starman, Ashes to Ashes and Life on Mars.

Bowie’s career spanned more than 50 years, from the heady days of the early Sixties right up to the time of his death from liver cancer.

His final album, Blackstar, was released on his 69th birthday, just two days before he passed away. But when did Pop Up Bowie frontman Paul Antony first become aware of him? “Like many Bowie fans, I saw him performing Starman on Top of the Pops in 1972. It was like his music was in Technicolor.”

What in Paul’s view made Bowie stand out as an artist?

“His willingness to experiment with different genres. He was consistently a great songwriter and never did the obvious.” What are Paul’s favourite Bowie songs to listen to and to perform?

“I always feel better after listening to Sound and Vision, while I love singing China Girl. Vocally it’s both delicate and powerful, while the pop melody conceals a strong message.”

What can the Kenton audience expect next Saturday?

“A Pop Up Bowie gig is primarily a celebration of the music. Bowie fans are loyal, knowledgeable, and incredibly passionate. They cut across age barriers and it’s fascinating to see which era people respond to. For some it’s Ziggy, while others love Aladdin Sane, the so-called Berlin Trilogy albums, or the Eighties period.”

As photographs of him confirm, Paul bears a remarkable likeness to Bowie, especially on stage. Was it this which motivated him to start Pop Up Bowie?

“I’ve always performed Bowie’s songs. The first one I learned to play on guitar was Jean Genie. Pop Up Bowie evolved over the years.”