Pianist’s saying thank you with the music 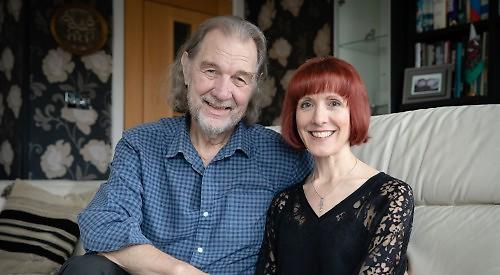 CONCERT pianist Anita D’Attellis is looking forward to getting back to what she does best next weekend.

For the past two years, Anita has curated and performed in a series of four winter chamber music recitals at St Mary-le-More church in Market Place, Wallingford.

The concerts proved extremely popular — raising £6,000 for the church’s tower fund — and have built up a keen following among South Oxfordshire music lovers.

But after Anita’s husband, the award-winning former Fleet Street photographer John Downing, was diagnosed with terminal cancer in December 2018, she was understandably unsure about whether or not to plan a 2020 series.

“I have to admit that for many months I decided I wasn’t going to do another one,” says Anita. “Because of my husband’s health I’ve taken a bit of a step back on my performing in general.

“So I’ve really had a break and I thought that it would be too much then to take on the winter recitals, because I basically wanted to be at home with him looking after him.”

Mr Downing was diagnosed with malignant mesothelioma, a cancer affecting the lining of the lungs that is usually caused by inhaling asbestos. The condition takes decades to develop, so he is unsure how he contracted it, but during his 40-year career with the Daily Express he worked in more than 100 countries, chronicling wars, natural disasters and other crises.

“John is still very poorly,” says Anita. “We talked about it at some length and he always wanted me to do a third series because he thought, you know, you’ve got to keep it going now you’ve started it and it’s been so successful.

“I was torn for quite a few months, so I’ve arranged this one quite late in the day compared to last year because it took me a while to get my head around it and decide that it was the right thing to do.”

With St Mary-le-More’s tower fund having hit its target last year, half the proceeds from this year’s concerts will be going to the church’s newly launched organ appeal — with the other half going to Anita and John’s chosen charity, Sue Ryder.

“At the moment, John is having visits from the Sue Ryder nurses, who are just fantastic,” says Anita, who lives in Reading Road, Henley. “It’s quite amazing, actually. They do come and visit, but equally they have this helpline which is open seven days a week.

“Quite a few times I’ve needed to call them about medication and they’ve just been so efficient. Just wonderful. And they’re so lovely as well. So that’s also quite a personal thing. It’s very important to know that they exist, and they’ve helped us so much already. Anyway, I’m very happy to be raising money for them as well.”

The first of the four concerts takes place next Saturday (January 18) at 7.30pm and will open with a performance of The Four Seasons of Buenos Aires by Astor Piazzolla.

Anita said: “Composed in the Sixties, they are inspired by the music of Piazzolla’s native Argentina, with elements of jazz and classical music thrown in, to create a unique style of exuberant tango music. Also on the programme are four delightful Miniatures by Frank Bridge and the virtuosic and passionate Piano Trio in D minor by Felix Mendelssohn.”

As in previous years, Anita will be joined by leading professional musicians, with the fourth concert offering a showcase for the talents of younger players.

For the first recital, Anita will form a piano trio with Peter Davis on violin and Bryony Moody on cello. “I performed with them in that combination last June,” says Anita. “It worked very well, we got on well, and one of the pieces from that concert we’re doing again — the Mendelssohn trio, which is just an amazing piece.

“But what I’m very excited about playing are these tango-inspired pieces by Piazzolla. There’s just something about the tango — it’s so strong and vibrant and rhythmic — and I think a little bit different too. If you go to a piano trio recital you don’t often hear them.”

The second concert — on Saturday, February 8 — is situated somewhat closer to the classical mainstream.

To mark the 250th anniversary of Beethoven’s birth, Anita will be performing a triple bill of piano sonatas that aims to chart the composer’s remarkable development.

“The thing that musicians say about Beethoven is how much he progressed and how his style changed in his lifetime,” says Anita.

“His very early pieces are a bit like Classical pieces — like Haydn, say — but he really, really developed in an extraordinary way. He developed music so that it went into the Romantic period.

“And so what I’ve tried to do with this concert is I’m playing three sonatas that are spaced out throughout his composing career, and it will show how he got bigger and better.

“Beethoven was a pianist as well as a composer and of course in those days a lot of composers were also performers — they kind of went side by side. Like Mozart, Beethoven was well known for his improvisations. So he would literally be able to sit down at a piano and make things up on the spot.

“But then unfortunately, because of his deafness, he had to give up his performing career. Just generally, if he was playing one of his concertos, he wouldn’t be able to hear the orchestra. And of course as a musician that was just terrifying because you really do need your ears to tune in with anyone else.

“This was obviously a very difficult hurdle that he had to overcome. And one can speculate — did he progress so much with his composition because he wasn’t hearing other people or because he was sort of in his own mind? I wonder if then it didn’t help him become the great composer he was.

“Because he could hear it all in his head, he was still composing even when he was completely deaf. But as he gets to the end of his life, his compositions are really, really extraordinary. And considered at the time unplayable because they were so different to what was going on around him.”

The third concert in the series — on Saturday, February 22 — will see Anita joined by Colette Salkeld on clarinet and George White on viola.

She said: “The unusual combination of clarinet and viola makes for a rare treat. Both instruments have sonorous and mellow qualities which complement each other extremely well.

“The Kegelstatt Trio by Mozart is the first work written for the trio ensemble of clarinet, viola and piano — it is a masterpiece of Classical chamber music.

“More than a century later, Max Bruch wrote Eight Pieces for the same trio combination, composing them for his son, a talented clarinettist. They are highly romantic and attractive works.”

Titled “Bring on the Youth!”, the fourth and final concert in the series will take place on Saturday, March 7, and promises an evening of instrumental and vocal solos from the music scholars of Queen Anne’s School in Caversham, where Anita recently started teaching.

All four recitals start at 7.30pm and will be performed in the round. Tickets are £12 in advance or £14 on the door. There is free entry for ages 18 and under. For more information and to book, visit www.ticketsource.co.uk/wrw2020 or www.anitapiano.com/wrw2020