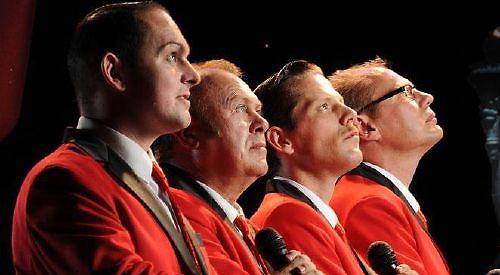 THE music of Frankie Valli and the Four Seasons is coming to the Kenton Theatre tomorrow night (Saturday), writes Peter Anderson.

Tribute act The New Jersey Boys will be in concert from 7.30pm with a choreographed show that features the humour of
all-round entertainer Gary Gould and the falsetto voice of Einar Vestman.

As well as all the hits from the Four Seasons, the two-set programme includes tributes to the likes of Elton John, Freddie Mercury and Tina Turner.

The New Jersey Boys were founded by Gary Gould, who also comperes the show.

He said: “I have always loved the music of Frankie Valli and the Four Seasons,

“I lived in Spain for a long time and started the group with Einar Vestmann, who happens to be my son-in-law. He was born in Iceland but grew up in Sweden and has an amazing soaring falsetto voice.

“With two others we spent a number of years touring the Costas with the show.

“Einar and I returned to the UK with our families, recruited another two singers to join us and have now been touring the show for approaching a decade.”

The New Jersey Boys take their name from the Tony Award-winning musical about Frankie Valli and the Four Seasons, which has been touring since the early Nineties.

For more information and to book, call the Kenton box office on (01491) 575698 or visit www.kentontheatre.co.uk