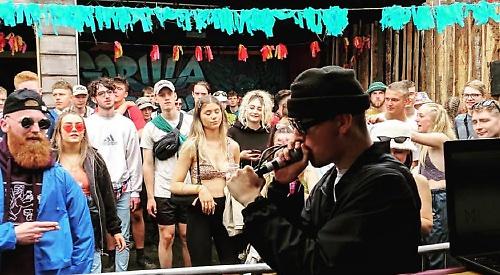 THE grandson of a former Henley mayor is trying to make a career as a musician.

George Buckett, a hip hop artist and rapper, has played about 25 gigs in the past two years and is building a reputation for his songs online.

And the 21-year-old, who lives in Vicarage Road, says he wants to put the town on the musical map.

George was first introduced to music as a child when his late grandfather Terry used to play him Beatles songs. He found it was a useful distraction from school as he was not academic.

George grew up on the Gainsborough estate, where his mother Susan still lives, while his father Lee lives in Binfield Heath and runs his own removal company.

He has two half-sisters, Jodie, who works in fashion PR in London, and Charlotte, 11, and a half-brother, Harrison, eight.

George attended Trinity Primary School, where he learned to play the drums, and then Gillotts School.

He says: “I tried at school but my head was always somewhere else. I had lots of energy but I didn’t know how to use it.

“I was always into music — even before I was born my dad would put headphones on my mum’s belly — but I was always listening to things that everyone else wasn’t. Music is so fulfilling and for me it is a way of escaping.”

When Mr Buckett, a postman and town councillor who was a key figure in the campaign to save Townlands Hospital, died in 2009, aged 56, it upset his grandson.

“He used to play Beatles songs to me all the time,” says George. “His death affected me very badly but it also inspired me to make a success of myself.

“I have always thought that if you lose one big voice you should try to gain another.

“I had counselling when he died and then they started a guitar club at Gillotts and I started going to that instead of lessons.

“I had drum lessons at Trinity and I had the instructions and the sticks but I didn’t have the drum kit. I had to use a rubber mat to practise on.

“I wanted to get out of school and find a way to express my creativity. Music has never been a chore for me and picking up an instrument feels very natural.”

In 2013, when he was in year 10 at Gillotts, he and his friend Jake Clark formed a band called To Burn and Blossom for a school talent show. The teenagers would rehearse weekly at the home of his grandfather’s widow Pauline in Vicarage Road — much to the annoyance of her neighbours.

George played the drums, Jake played bass guitar while the group’s vocalist and lead guitarist were two 19-year-olds from Whitley.

When he left Gillotts, George went to Berkshire College of Agriculture to study creative media production.

The band broke up so he started recording music using a microphone from a PlayStation game.

He says: “I didn’t have any of the proper equipment as it is expensive but I was resourceful.”

Since then he has spent many hours in his bedroom writing songs and has recorded one EP, called It Is What It Is, which was released a year ago.

One song on it is called Wait Stop Listen and is about the frustration of young people with politics.

George says: “I like to make the sort of music that everyone can enjoy. It is hard for people to relate to a lot of music, so I like to put lots of topics in the lyrics that are relatable. I have always been about making people laugh.

“I have taken down notes from every musician from John Lennon to Jon Bon Jovi. I will watch videos of them for hours to study them. I would say that John Lennon, post-Beatles, is a big influence. He would make music outside his kitchen and that is the way it should be.”

He has been playing live for the last three years and in 2018 made only his fourth live performance at Bestival in Dorset, a music festival known for its diverse line-up. Also on the bill were Grace Jones and Chaka Khan.

George says: “My manager at the time had connections with the festival. The owner of the festival had heard some of my stuff and asked me to perform on the Bollywood stage. It was incredible but I really struggled to get on stage as I had a bit of a panic attack beforehand. It was very surreal.

“In fact it was the best performance I’ve done so far. It was only to a few hundred people but I don’t take anything for granted.

“When you go out on stage you are an entertainer and you want to make sure that people who have come to watch you are happy and do not feel like they’ve wasted their time and money.”

Over the last two years, George has played 25 gigs at a venues in Reading and High Wycombe as well as London, Bournemouth and Bristol.

He has also been busy writing and last month he recorded some songs at Abbey Road studios in London, which was made famous by the Beatles. He worked alongside fellow former Gillotts pupils Harry Burrow and Sam Jones.

George says: “I have already made enough music to release something online every month until next year.” He is particularly proud of his online presence. He has achieved 92,000 plays on Soundcloud, a European music sharing website, and has 2,600 followers on Instagram.

Through Spotify, another digital music service, he is able to view the places where his music is most popular.

George says: “London is at the top of the list and Bristol is second. I had to scroll all the way down to 33 to find Henley. That is something I would like to change.

“I have lots of confidence in myself. I feel that you can’t love music as much as I do without making something of it.

“If I’m at this level for the rest of my life I would be happy — I don’t think I would want to be that well-known. I want to prove to young people that you can make music without much help.

With no investment apart from a laptop and a microphone, I have gone from having zero attention to having more than 140,000 streaming figures in more than 30 countries. I have had to work hard though.”