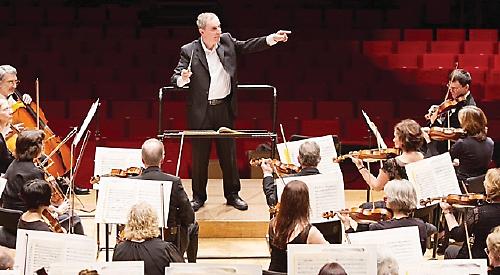 HENLEY Symphony Orchestra will celebrate its 50th anniversary on Sunday with a gala concert at the Hexagon in Reading.

Starting at 7.30pm, the programme comprises the Academic Festival Overture by Brahms, the Piano Concerto No 20 in D minor K466 by Mozart, and Symphony No 9 “From the New World” by Dvorák.

Ian Brown, who has been the orchestra’s music director for the past 25 years, will conduct.

A spokesman for the orchestra said: “HSO continues its proud record of engaging internationally acclaimed soloists by welcoming Eric Lu to play Mozart’s dark and dramatic Piano Concerto No 20, whose second movement, a tender romance, is used to striking effect in the soundtrack of the film Amadeus.

“Since Eric’s unprecedented success as the winner of the 2018 Leeds International Piano Competition at the age of 20, he has built an extraordinary worldwide career and is currently a
member of the BBC New Generation Artists scheme. He made his BBC Proms debut with the Shanghai Symphony Orchestra and Long Yu in summer 2019.”

Having originally played its concerts at Henley’ s old Regal cinema, which was demolished in 1993, the orchestra moved to the Hexagon six years later —
a switch that will find a conscious echo in the concluding section of Sunday’s concert.

The spokesman said: “Influenced by indigenous American folk tunes, “Dvorák’s most famous Symphony No 9 ‘From the New World’ has an apparently inexhaustible flow of melodies with a justly celebrated slow movement at its heart.

“HSO last played this symphony at its first Hexagon concert in 1999, so it makes a fitting conclusion to this very special anniversary concert. You are most warmly invited to join us.”

Tickets are £20, £17 and £12, with under-16s and students half-price and group and family offers available. For more information and to book, call the HSO box office on 01235 859210 or visit www.henleysymphony
orchestra.co.uk/contact

A RAMP for wheelchair users has been installed at ... [more]