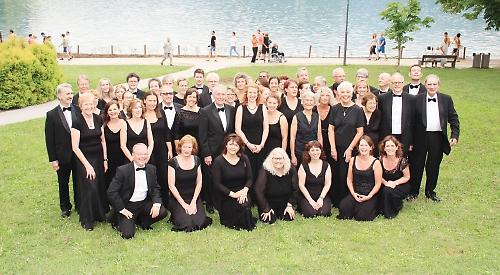 HALF a century is an impressive span of time for any organisation to be in existence, much less an amateur orchestra.

So the members and supporters of Henley Symphony Orchestra had much to celebrate on Sunday evening when they gathered at the Hexagon for the third fixture in their 50th anniversary season.

Billed as a gala concert, this was supposed to have been the real focal point of the celebrations.

And indeed it proved a joyful and highly successful evening — if not entirely immune to the effects of the coronavirus crisis.

Opening the proceedings was town, district and county councillor Stefan Gawrysiak, who set the scene with a warm speech in which he briefly rehearsed the orchestra’s history and reminded everyone present of its many achievements.

“HSO is all about the people,” he said. “Members of the orchestra with great musical technical ability — and members of the audience with a passion for classical music.”

Echoing this sentiment, he quoted a HSO member who, in answer to the question “Why this orchestra?” had said: “Only three conductors in 50 years speaks for itself — they love working with us and we with them!”

Preceded by Jim Stobart and Marcus Dodds, HSO music director Ian Brown has conducted the orchestra for the past 25 years, while the leader of the orchestra David Burton has been in post since 1992.

Opening with Brahms’s Academic Festival Overture, written as a thank you to the University of Breslau for awarding the composer an honorary doctorate in philosophy, it combines a mixture of student drinking songs with the more serious aspects of academia.

The orchestra were joined by Kristian Bezuidenhout, a South African pianist replacing Eric Lu — who had had to cut short his European tour in order to beat the US travel ban — for Mozart’s Piano Concerto in D minor K466.

The soloist’s recent releases include volume two of Mozart’s piano concertos and previously the Complete Keyboard Music of Mozart. I am always curious to hear the interpretations of cadenzas of concertos and Kristian did not disappoint; sparkling virtuosity and original ideas came to the fore and drew the audience in ... quite delightful.

The performance of Dvorák’s iconic Symphony No 9 “From the New World” in the second half of the programme was superbly played by HSO with brass and strings decisive and bold right from the start and memorable melodies from the woodwind section, suggestive of the composer’s pining for his homeland of Bohemia.

Surges of sound from tremolando strings punctuated by percussion made this an exciting delivery.

The juxtaposition of folk melody and nods to the Spirituals of the American South was a powerful combination and Dvorák’s use of orchestral colour was admirably conveyed under Ian Brown’s baton.

As Cllr Gawrysiak rightly said, here’s to another 50 years of the HSO.