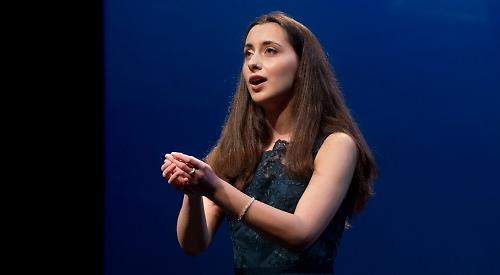 THE recipient of this year’s Elizabeth Griffin Award was Ellie Vockins.

Fi Harding, of the Henley Youth Choir, said the 17-year-old w as a truly worthy recipient and a wonderful inspiration to others.

She said: “When I sing, it’s just the best feeling and I love to sing for people whatever the reaction.

Mrs Harding said: “Ellie has sung at Henley Youth Festival for the last four years, firstly as a member of Henley Youth Choir seniors and then latterly as a soloist in her own right as well, performing Apres Un Reve by Faure at last year’s HYF Sing event and in 2018 Ave Maria by Schubert at the HYF Sing event and also the HYF Gala performance celebrating HYF’s 25th anniversary.”

Kate Swinburne-Johnson, co-chair of the festival, said: “The Elizabeth Griffin Award has been presented to Ellie Vockins for singing performances at our HYF shows over the last few years, which have been really inspiring to other performers.

“It’s fantastic that she continued to take part during her GCSE year and into sixth form when many others find pressures of school too much.

“The youth festival was started with the aim of showcasing the talent of Henley’s young people and Ellie’s performances are a great example of this.”

In 2003 the Griffin family gave the festival an award to present each year to someone who epitomises the ethos of the event in honour of their daughter Elizabeth.