Singer performs at another online festival 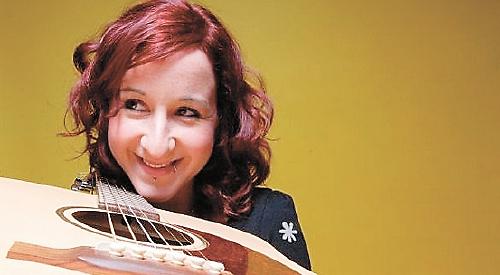 A SINGER songwriter who grew up in Henley took part in the Oxford Folk Weekend by performing over the internet.

Megan Henwood teamed up with Jackie Oates as she sang to around 150 people, who joined in with the live performance.

The organisers of the annual festival decided to go ahead by using Zoom, the video conferencing service, rather than cancelling due to the coronavirus.

Miss Henwood, who now lives in Oxford, said: “It is a local festival for me but it is also well regarded on the folk circuit. I was really pleased that they were willing to innovate and find a way of going ahead.

“I was slightly nervous about how it would work in terms of the experience for the audience but pretty much everybody that had bought a ticket was happy to watch it online.”

She sang seven songs during the hour-long performance, including Chemicals, Hello Goodbye and Rosie, which was a tribute to Bill Withers, who died in March. It was the fourth time she had appeared at the festival and the second time alongside Oates, who lives in Wallingford.

The pair met at Nettlebed Folk Club six years ago and they have collaborated on a number of projects, including Miss Henwood’s 2015 album Head, Heart, Hands.

She said: “I have known Jackie for a long time. She is an amazing fiddle player and she played on both my last two records.

“We released an EP with a number of duets but we don’t gig together that often. We know each other’s material, so we can easily do local gigs that we enjoy.

“A month ago I got the email from the festival to say they wanted to transfer it over to Zoom. They really did their research to make it run smoothly and it made me feel more confident.”

Miss Henwood performed in her spare room, which she uses as a studio, and used a microphone to maintain sound quality.

She added: “It was a shame not to be able to play together but it still felt like we were doing a gig together in some way. It felt like a collective experience and it was much easier than I anticipated to connect with the audience.

“There are so many people who are lonely at the moment and it still felt like I was in a room full of people, which was weird.

“You could see faces much better than if you were in an auditorium and during the first two songs there was one screen with just a sofa with a dog and no human in sight and that made me laugh.”

Miss Henwood grew up on Western Avenue in Henley with her parents Lucie and Colin and brother Joe, who is also a musician. Her love of music came from teachers at Gillotts School, who encouraged her.

Miss Henwood said: “I wanted to do music and art at GCSE but the timetables clashed so they facilitated an after-school alternative so that I could do both.

“Music is the only thing I have ever really enjoyed. My parents would always play music in the house and exposed me to it at an early age.”