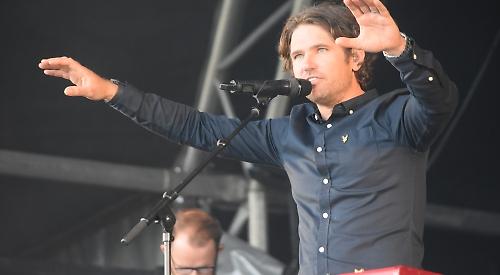 IT was very odd to see the rows and rows of cars lined up in their designated gardens at last weekend’s Pub in the Park’s Garden Party.

But people arrived determined to make the most of the opportunity to see some live music. Many brought fold-out tables and had set up entire meals ready to watch Katie Kittermaster, Soul II Soul and Kaiser Chiefs on Saturday afternoon.

Others were lounging on picnic blankets drinking wine.

When Kaiser Chiefs were on I was worried that the crowd seemed a little quiet, especially when there was not even half the number of people that would usually attend a festival.

Luckily, Ricky Wilson was good at getting the crowd involved, asking them to repeat his melodies back like Freddie Mercury, which I liked to think was an homage to the late singer on his birthday.

The best moment, however, was when I realised that the honking of the car horn had replaced the traditional sound of applause. It was like being stuck in traffic, except Wilson was there encouraging the noise.

“Right side beep, now left side beep,” he was yelling. He even teased the VIP parking at the front and said: “You at the front don’t know what you’re missing, the back people are doing donuts.”

They played a lot of their hit songs like Ruby and I Predict a Riot, as well as some new songs from their latest album Duck. The band finished with Oh My God, which had people jumping up and down and singing along.

On Sunday afternoon, the audience waited patiently for Cecil, Scouting for Girls and Gabrielle.

Cecil, a pop singer-songwriter from Berkshire, started the event with covers like Iris by the GooGoo Dolls and original songs Ceasefire and Black Maria.

It was a chilled acoustic set which the audience sang along to. Cecil’s performance was organised last minute in place of Craig Charles. She joked that she should have left London earlier due to all the tractors in the country lanes of Oxfordshire.

Roy Stride from Scouting for Girls was a particular favourite of mine, dancing round the stage to their hit song Heartbeat.

I certainly felt safe throughout the weekend and the organisers appeared to think of everything to maintain social distancing.

I don’t think a drive-in concert will ever replace the joy of jumping in a crowd of people but it absolutely will do for now.