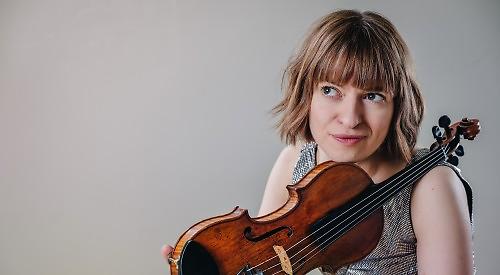 A REWORKING of Antonio Vivaldi’s Four Seasons will get its world premiere in Henley next month.

Violinist Fenella Humphreys will present the work at St Mary’s Church from 6pm on October 5 as part of the Chiltern Arts Festival.

She will be accompanied by Murray Grainger (accordion), Ben Griffiths (double bass) and George Barton (percussion) as they bring new sounds to this baroque masterpiece.

Four Seasons is the best-known of Vivaldi’s works and each of the violin concertos represents a musical expression to a season of the year.

Fenella, who lives in Kent, came up with the idea while rehearsing it.

She said: “Everybody knows Vivaldi’s Four Seasons so well and we’re not messing with the music — that is absolutely there and the violin is still at the centre.

“While rehearsing it a couple of years ago, I was imagining the colours being produced as if they were made by other instruments and the idea went from there.

“When I am talking about colour, I’m referring to the sounds made. In our reimagining you will still hear the notes you expect to hear but in a different way — a different colour.

“The same pictures are being painted but before it might have been a dark blue and now, due to using a different instrument, it is a bright red.

“During that rehearsal I was suddenly hearing other sounds, particularly percussion, even though I knew the pieces so well and performed it so much.”

Vivaldi used sounds to create imagery in the concertos and also wrote poems to explain the score.

Fenella says the new arrangements will allow listeners to pick out fresh things from the score, sounds they have not heard before.

She explained: “In the original pieces there is a movement where one of the parts is supposed to be a dog. This was played on viola, which you may not notice is there, but moving it on to a double bass, it sounds even more dog-like.

“There’s another bit where you are sitting in front of a fire in winter with the rain coming down outside and you are cosy indoors. The new arrangement is about picking our identical lines but experiencing it in a different way. It has certainly been really good to go back through the poems to find these colours and see what you can do.”

Fenella, who won the 2018 BBC Music Magazine Instrumental Award, said Vivaldi was one to recreate his own music and so would approve of what she has done.

She said: “It is music that is so loved and so often performed that there is scope to reinterpret it. It is also about taking the ideas of the original and taking it further away.

“Vivaldi was always recreating his own music from what was available so what I am doing doesn’t feel like a bad thing.”

Fenella admits to not enjoying the piece when she was young but has grown to love it.

“Growing up I hated it,” she said. “Everybody played it and often quite badly so as a child I thought it was rubbish and so I always put off learning it.

“But when I did and got into the scale, I realised just how clever it is in the scenes that it creates and the way he uses the music to describe things in the world, whether it is ice or being cold — it is utterly genius. It is something that got better the more I got to know it.”

In addition to Four Seasons, the group will perform three new works that Fenella commissioned to link the concertos together. The concert in its entirety will last about an hour.

It will be Fenella’s first live show since March, when the lockdown restrictions were introduced to combat the coronavirus pandemic.

Fenella is looking forward to it. She said: As a classical musician, I work 18 months ahead so to lose it all overnight was devastating as I have never not performed.

“Rather than watching episodes of Don’t Tell the Bride, I decided to do a series of living room concerts streamed on YouTube.

“Having no applause didn’t bother me but what I have missed is the feeling you get from your audience as it affects the way that you perform and make music.

“It is a two-way thing and people don’t often realise that and not having audiences to bounce off has been one of the hardest things.

“I will never take an audience for granted and to be performing in front of people again will be an incredible feeling.”

• Tickets for Fenella Humphreys & Friends: Vivaldi’s Four Seasons Reimagined start at £24 from the box office on 01442 920303 and www.chilternarts.com