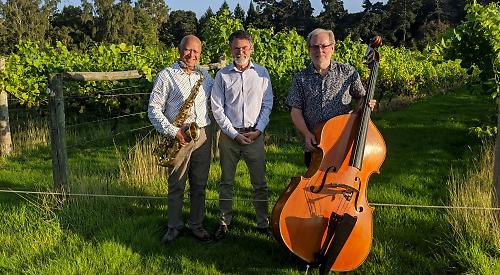 A LIVE jazz performance will be staged at a vineyard in Fawley on Sunday.

The Art Themen Trio will be playing their second Jazz in the Vines gig, which follows last Sunday’s sold-out show.

Spectators will be able to listen to some choice cuts such as Come Fly With Me and Makin’ Whooppee with wine and local cheeses.

Art, who lives in Wharfe Lane, Henley, has been a major player on the British jazz scene since the Sixties and fronted the Stan Tracey Quartet for more than 20 years.

He has won a British jazz award for tenor sax and regularly performs in and around Henley in venues including Goring village hall, Norden Farm Centre for the Arts in Maidenhead and Marlow Jazz Club.

Danny is guitarist and singer, who has played with some of New Orleans finest including Lillian Boutte and members of The Meters, Dr John and the Harry Connick Jnr Big Band.

Andy, who lives in Henley, tours nationally and internationally performing jazz with the likes of John Etheridge and Moscow Drug Club but has also played in various rock projects such as a Led Zeppelin tribute band.

The vineyard is offering picnic tables at £150 each, which seat six, making it £25 a head. This includes a bottle of wine from the venue, a bottle of water, a graze box of local cheese and charcuterie.

The seating is situated under a canopy on the terrace in case of wet weather. Spectators are advised to bring cushions and blankets.

Gates open at 2pm for a socially-distanced drink and chat. There will also be a bar serving local beer and spirits and still and sparkling wine.

Spaces are limited to 10 tables. Full covid-19 restrictions apply. For more information, including how to book, visit https://oakengrovevineyard
.co.uk