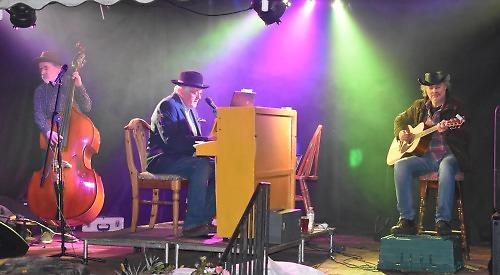 A PUBLICAN has produced his own version of a Tom Jones classic to raise money for charity.

Nick Willson, who runs the Flowing Spring in Playhatch, rewrote the 1968 hit Delilah and called it The Christmas Satsuma Song as he used to be given the fruit at Christmas as a child.

His music video was played for the first time on a big screen in the garden at the Henley Road pub on Friday evening, watched by a crowd of regulars.

It can be viewed on YouTube and people are asked to make online donations in aid of Macmillan Cancer Support.

The pub is known for holding singalong evenings and the satusma tune is in that spirit with lots of customers joining in with the landlord and his band.

He sings and plays the piano with Steve Lester on guitar and Paul Minchington on double bass.

Mr Willson, who runs the pub with his wife, Hazel Lucas, said: “We do these singalong nights a few times a year and we always do one at Christmas. Last Christmas, we decided to change the lyrics to some well-known songs and Delilah was one of them. We also did Stuck in the Chimney With You.

“The aim was to release the songs for charity. We had been recording the video when the virus hit and all that ground to a halt.

“But I just couldn’t leave the Tom Jones one alone as it lends itself so well to being acted out.

“The more it is viewed and shared, the more we can raise awareness of Macmillan’s unstinting efforts in helping everyone living with cancer and raise as much money as possible.

“Seven or eight years ago Hazel’s aunt had lung cancer and the support she got at home from Macmillan was astounding.”

Before Friday’s screening, the band performed songs including Rabbit by Chas and Dave, King of the Road by Roger Miller and Space Oddity by David Bowie.

Mr Willson said: “It went down a treat. Many of the people who are in the video were there.”

The video, which was filmed and edited by Bradley Lucas, features the landlord as a child being given some unwanted presents, such as Brazil nuts, soap and, of course, satsumas.

He said: “Music has always been dear to me and I like to be creative and have a bit of fun.

“It took a while to get all the props and the clothing and I acted out all the characters in a quirky corner of the pub.”

The video starts with the landlord sitting at his yellow upright flatpack piano, which he made during the lockdown. He then welcomes his “clone” Dolly to perform the different characters, including himself as a child.

During the story, the boy falls from a chair and injures himself as he attempts to decorate a Christmas tree. He is then seen asleep in bed when Father Christmas comes into the room and fills his stocking with gifts.

He then plays the boy’s parents and aunt, who have gathered to exchange presents on Christmas Day but, instead of the telescope he wanted, the boy is given a satsuma.

The video finishes with his teenage character hitting the satsuma with a hammer. Mr Willson bought plastic fruit online and had to borrow most of the clothing from family members.

In order for him to appear in the same shot twice as different characters, he used a fixed camera and the same background before merging two recordings together.

Mr Willson said: “Some of the story is exaggerated but some of it is true. I always used to get satsumas for Christmas and the big question is why? I am not the only one and have always wondered what is the point?”

It took him 10 days to make his portable plywood piano, which he decided to do because his band were starting to get bookings and they couldn’t take the pub piano with them.

“It is a bit of a novelty,” said Mr Willson. “I wasn’t going to go with yellow — I was thinking maybe red or blue and then Hazel said it should be yellow.

“I was really pleased with it and it has become part of our brand. The band is all about the piano.”

The couple, who have been married for 14 years, are hopeful they will be able to hold their annual music festival called Springstock in June next year. This year’s event was cancelled due to the pandemic.

Earlier this month, they celebrated a decade at the Flowing Spring, which they bought from Fuller’s in 2017.