Singer spreads the love with homage to hometown theatre 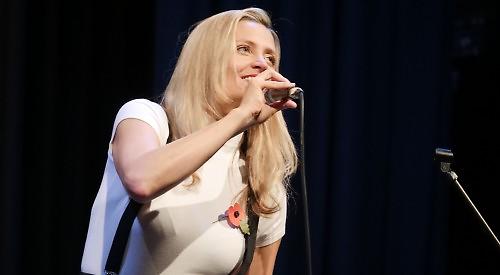 I CAN’T think of a better way to unwind on a Friday night than sitting down in the Kenton Theatre to enjoy a stripped-back, acoustic set from jazz singer Rebecca Poole, who performs under the moniker Purdy.

Except it wasn’t quite the New Street venue in Henley, it was my sofa more than 20 miles away.

But Purdy did a great job at making us all feel like we were there, singing along, during her Facebook live concert for the Kenton for Keeps Campaign, launched to support the venue during the coronavirus pandemic.

Purdy then went into a new song called Make Believe, followed by her 2017 single, Too In Love With Love, which had a very nice Christmas feel to it.

She followed it up with a cover of Paul Young’s I Wish You Love before going into a new original song which she had intended to be a duet.

She said: “I wrote this for me and Frank Sinatra to sing together but he’s not here so I’m going to do it on my own.” In it, she sings: “Love you to the last breath that I breathe” and Purdy added: “Hopefully there will never be a last breath from the Kenton Theatre. We are raising funds for the building right in the heart of my home town.”

It was clear how much the theatre means to Purdy, who grew up in Nettlebed, and her music sounded at home up on the theatre’s stage.

Perhaps my favourite moment of the concert was Purdy’s surprisingly realistic trumpet impression in her original song Bottom of the Bottle in homage to Vera Lynn’s We’ll Meet Again.

I’m desperate to hear what the original trumpet version sounds like because I don’t think it can beat Purdy’s acoustic version.

She then finished with what I think is now one of my favourite songs, her 2020 release, Happy. It was very upbeat and it must have had people dancing on their sofas (or at the very least, me), after she reminded the audience that the lockdown will be okay. She said: “We’ll be fine, we’ll get through to the other side, we’ve got each other.”

The song was still stuck in my head days after the live concert except my voice doesn’t sound quite as elegant as Purdy’s.

Jamie McMcredie, Purdy’s guitarist, was also brilliant, prompting one viewer to comment on the live stream: “He can really play that thing!”

The entire performance was a joy to watch and, at the very least, Purdy has a brand-new fan. I am not quite sure she’d enjoy me murdering her songs, though.