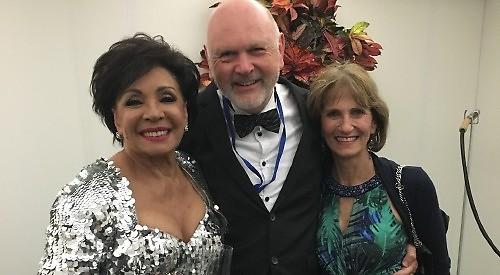 STEWART COLLINS has been the Henley Festival’s artistic director for 30 years but will retire after this year’s event . During his time, the summer evening festival has grown from four days to five and increased its audiences by attracting popular headliners such as Elton John, Tom Jones, Rita Ora, Jessie J and the Pet Shop Boys. Here, Stewart reminisces on some of his favourite moments.

AS I drove down Remenham Hill the thought came into my head that this might be the last time I would ever drive into Henley, such was the possibility that the festival would be cancelled. Once and for all. The board meeting I was about to attend would make that decision.

The financial situation was grim and the world wasn’t in a great place. And the decision was? To go ahead. Phew…

That fateful drive down the hill and meeting actually occurred in November 1991 but it could so easily have been 2020, such have been the challenges of the covid year.

But, in a sense, anyone working in arts and entertainment has known how vulnerable our organisations are for years as we put on events that are so easily affected by events. The year 2020 has merely been the worst of it.

Rather than sounding downbeat, let me immediately rebalance things. I have never been anything but positive about what’s going on now and what’s to come. For me, it’s the only way to be.

In that spirit, my reflections on having been artistic director of Henley Festival since autumn 1991 are only positive. It has almost literally been a ball for 30 years and the flood of memories almost universally positive (okay, apart from the occasional flood of the festival site, mad cow disease and, of course, covid.)

So where does one start? Well, actually, with the people on whose shoulders I have proudly sat since joining the festival: the original duo of regatta chairman Peter Coni and the muse for the original festival concept, Roy Ackerman.

As they realised way back in 1982, if you have all the regatta’s infrastructure up for just five days a year, surely there’s something else that can be done with it both for Henley and also, frankly, for the bank balance.

But since the founding of the festival — and indeed in my time — so much has changed and developed, something that is easily charted as you look back through the beautiful souvenir programmes we have produced over the years.

Where my first star turn in 1992 was Rita Hunter (well, she was famous at the time… if you knew her) in recent years we have seen Elton John, Lionel Richie, Tom Jones, Shirley Bassey, Sting and so many others.

And so many others! I suspect that, like me, most festival regulars don’t just think of the headliners when reflecting on the amazing five days we conjure up each July. They think of the incredible kaleidoscope that is a festival evening, the individual parts that make Henley Festival add up to so much more than just another night out.

Over 30 years there has been highlight after highlight, as that’s what keeps an artistic director up at night — how do I raise the bar year on year?

But, if you were to ask me for my top five, two of them would be festival headliners where I went way beyond the extra mile to secure the dates. Both required a real mix of heavy lifting and gradual seduction (in a good way, of course).

Elton John, for example, didn’t play festivals. Elton certainly didn’t play “small” festivals such as ours. And Elton’s fees were well known to be significant. Well, Elton did play our small festival and it was an amazing and memorable night. In fact unforgettable.

The other “floating” stage event that sticks out was in 2000, the year when the festival first “went large” — our first booking of a truly worldwide superstar, our own member of the Three Tenors, Jose Carreras.

Realising we could have sold this brilliant concert twice over, the huge financial leap into the dark paid off. The thrill was palpable and the whole experience helped chart the future. The year 2001 saw the third of my thrills — the year we adapted the floating stage so that after each headline concert we could stage Storm — a show by the spectacular circus troupe that had created the extraordinary centre piece of the Millennium Dome’s otherwise pretty prosaic offering in 2000. For us, this incredible company gave us five wholly remarkable evenings.

What else? The Flying Drummers — if you saw them, you will remember them. Then the most amazing pieces of sculpture ever seen on the site by the monumental American artist Danny Lane.

Lastly, the Roving Company every year. That’s our resident company of performers who are with us in name every year, but in fact are made up of different and wonderfully lunatic, inspired and beautiful acts from around the globe, which do so much to light up every Henley Festival.

I’ve always thought that if I had a pound for every time someone has told me how special the festival is, I could probably have afforded to live in Henley

There’s no doubt that for 30 years I have been able to open each new year’s diary in the knowledge that five days in the middle of that year would be remarkable in the extreme. What a pleasure and privilege.