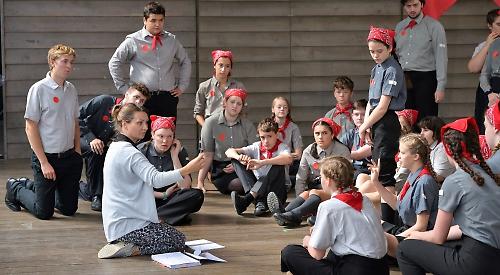 YOUNG singers are being invited to sign up for the chance to perform a new work commissioned by Garsington Opera this summer.

Composed by John Barber with a libretto by Jessica Duchen based on the children’s story by Oscar Wilde, The Selfish Giant will premiere at the Wormsley Estate on Thursday, July 29.

Because of the coronavirus pandemic, auditions are having to be held digitally, with singers aged nine to 25 being asked to submit an online application and audition video by 6pm on Wednesday.

Full details of how to apply can be found on Garsington’s website, but director Karen Gillingham hopes nobody will be discouraged from applying whatever their level of previous experience.

She said: “The thing I think is really difficult for us in this current lockdown situation is being able to recruit young people who would never think that this was for them.

“And yes, of course, this is very much open to people who already have music lessons, who are already interested in creative arts.

“But ordinarily we’d be going around to all of our partner schools and doing workshops and not calling them auditions and saying, ‘Come and try this out.’

“We just explore for about an hour with them, getting a piece of repertoire on its feet. There’s usually a singer in the room. We teach them the chorus and then we say, ‘Oh, by the way, there’s these companies who can come and do this more if you want’.

“And then they opt into a workshop, which is an audition but we still call it a workshop.

“Because when we’re looking for children to be in an opera company, I think people assume it’s for a very polished, very specific set of skills. We’re very much about potential rather than somebody who has sort of arrived, having had singing lessons every week since they were five.

“I’m not saying it’s not for them because of course it’s for them as well but we want the company to be very diverse in all aspects.”

As well as calling for singers to come forward, the production is offering young people aged 13 to 25 the chance to explore backstage opportunities through working with a professional designer or stage manager.

For Karen, opera remains very much a part of the wider music theatre tradition.

She said: “I think a lot of people have the perception that opera’s not for young people in terms of them singing it. And actually, it’s a sung story.

“There are children’s chorus parts in operas, but this is children at the heart of the story. They tell the story and they sing. You know, it’s a fun story.

“Musical theatre is a very broad word in my head and it signifies a genre that is different to opera in some ways but there is a lot of crossover.”

With the country beginning to gradually move out of lockdown, it is hoped that when rehearsals start in April it will be possible for socially distanced bubbles of 15 singers to rehearse together.

Composer Barber thinks one of the nice things about Wilde’s story is that it has a resonance with recent events.

He said: “In The Selfish Giant there’s a garden that young people can play in which they get kind of banished from and told to leave by the giant. And then when they eventually pluck up the courage to come back into it, that’s when spring returns.

His own relationship with The Selfish Giant began at a young age. He said: “It’s a story I knew really well growing up. I’ve always really liked the story and I’ve always kind of had it on my wish list of pieces to tell as an opera because there’s so many musical possibilities — and also the central message that by sharing what you have you gain so much.”

Up to 90 singing places are available. For more information, visit www.garsingtonopera.org/
performance/youth-company