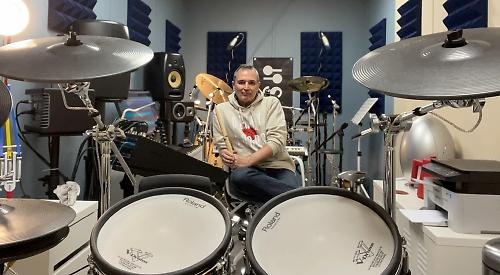 A DRUMMER who worked on a Jerry Springer chat show is now teaching in Henley.

He converted an old shipping container and has been teaching drummers of all abilities locally since June last year, although most of his lessons have had to be held digitally.

Prior to moving to Henley in December 2018, Mr Ettridge had a busy music career which included being a member of Afro-pop band Mango Groove for 10 years.

He also did two seasons as a house band member on Jerry Springer Saturday Night Talk from 2004 and later worked on South African versions of The Voice and Idols.

Mr Ettridge said: “Jerry Springer was trying to break away from the actuality shows that he did in America and become a more mainstream chat show host and chose to use an independent TV network in South Africa for that platform. We had a very successful run of doing live shows.

“The franchise for Idols and The Voice is exactly the same wherever you go, with the same production company.

“We backed some remarkable artists and talent and quite often the best ones were eliminated. We wouldn’t know what we were playing until the day before the show. I enjoyed the adrenaline rush and it’s amazing what you can pull out of the hat when you don’t get a second chance.

“Mango Groove was probably one of the most well-known bands in South Africa and it one of the first to break through the racial barrier. It was the first and only multi-racial group at one time, but I joined long after the politics had normalised. It continues to be a major musical force.”

One of his fondest memories of being part of the band was playing at the Hammersmith Apollo in 2015.

He said: “That was one of the milestone gigs, but we did three world tours just in my tenure.”

Mr Ettridge lives in Greys Road with his wife Dani, a senior client and programme partner for Moving Ahead, a social impact organisation working to improve workplace inclusion and diversity.

He is originally from Kent, but spent most of his school life in Sussex. After leaving school, he worked as a sound engineer and started to get freelance work as a drummer on the holiday camp circuit and in nightclubs.

In the early Nineties, he got a contract to work in South Africa. It was intended to be a short-term arrangement, but he ended up staying in the country for 20 years after he met his wife, who is from Johannesburg.

They got married in 1998 and eventually moved to London in 2016 when Mrs Ettridge relocated her work with AON. They moved from Canary Wharf to Henley after “falling in love” with the town during a previous visit. He said: “I was doing freelance recording session work in London. I was teaching in a smaller DrumLab and I was catering mainly to the corporate sector in the area, but it wasn’t much bigger than a closet. I now have a bespoke facility and it is probably three times the size.”

Mr Ettridge has about 35 students, ranging from seven to 65 years old, and teaches six days a week. He is well-versed at teaching online, as he has students in Australia, Japan and Taiwan.

As a child, he always had a passion for music and tried several instruments before finding his “mojo” with the drums.

He said: “I played since I was 13. I loved the spectacle and I had more of an affinity with it than I did with any other instrument. My instructors really shaped my ambitions and made me determined to push forward as a professional.

“The most significant thing about playing as a session musician, or doing live shows, is to be completely authentic in everything you play and that’s one of the mantras that I live by when I teach.”

Beginners start with a programme called DrumLab Launchpad, covering all the basics of the kit set-up and fundamentals on grip and tuning.

The business has grown gradually since last summer through recommendations and Mr Ettridge hopes more people will sign up now lockdown measures have started to ease.

He said: “One of the most satisfying things about teaching is seeing the realisation from a student when the penny starts to drop after weeks of hard work. It is a constant source of joy.”