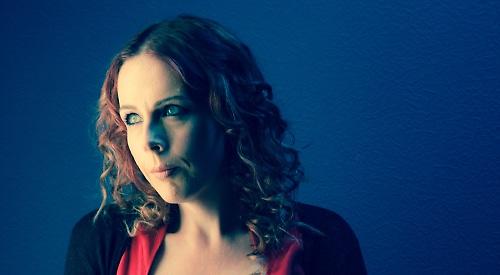 A SINGER from Benson has released an EP in aid of mental health charities after being inspired by the difficulties people have faced during lockdown.

Katie Thomas, who uses the stage name Katie Jane, has been singing professionally since the age of 15.

As well as performing live she works part-time as a session singer and has recorded for producers all over the world.

“When I was younger I was offered record deals and all kinds of stuff but I didn’t take it because I’ve always had this love for business as well and it’s always been the two together that I’ve done.”

Having initially made her name as a singer, Katie has also started to establish herself as a songwriter.

She says: “I’ve always written songs but it’s only in the last couple of years where I’ve started doing it professionally. It’s something that I care about very much and I’ve been very lucky since I started doing it properly. I’ve met some amazing people — I’ve worked with Beverley Knight and the lady who wrote songs for Christina Aguilera, all of these things. So it’s been really exciting.”

Katie has so far seen a number of her songs chart in Germany, while one that has yet to be released has been shortlisted for the next Eurovision Song Contest.

“The thing with songwriting is that if there’s any interest in a song you’re not allowed to put it in the public domain,” says Katie. “I don’t know if my song is definitely going to be used but it’s on the shortlist.”

Six months ago, around the time that the UK’s second national lockdown was announced, Katie started collaborating with songwriter and producer Darren Ross.

Together the pair have written a seven-track EP called Breathe that is available to buy from Katie’s website, with a percentage of profits going to charities including Mind.

Katie says: “I have two close friends who suffer from depression and anxiety, one of whom became suicidal during lockdown. Darren and I wrote Breathe to show unity and that nobody is truly alone. Clichéd as it sounds, it’s okay not to be okay, as long as we are all there for each other.”

The EP’s title track was inspired by something one of Katie’s friends said to her.

“She was going through a very toxic relationship, not a very nice relationship at all, and she kind of lost who she was,” says Katie. “When we managed to finally pull her out of this relationship she was very fragile and not who she used to be.

“And then she turned around to me one day and said, ‘It’s strange, because now I feel as though I’ve got my life back and I’m getting stronger, I feel like I can breathe.’ And that was the song.

“So from that moment I took that feeling and that emotion and tried to almost be her and then create something that would be emotive as a result of it.”

The Breathe EP costs £4.99 but tracks can be purchased individually. For more information and to listen to a preview, visit www.katiejaneartist.wixsite.com/my-site