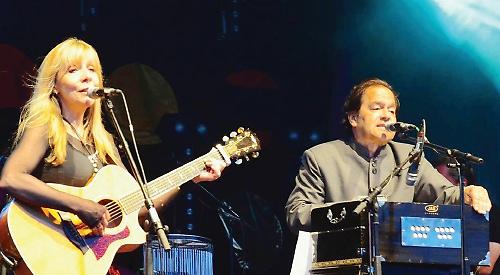 SINGER-songwriter Charlie Dore will be dipping into her back catalogue when she plays a live-streamed concert on Monday evening.

The gig, which is being staged in partnership with Nettlebed Folk Club, is being billed as a rare “curio show” featuring favourites from her last eight albums.

Charlie, who will be joined by her regular performing partner Julian Littman, says: “When playing live it’s easy to miss out songs we’ve always loved in favour of the current shiny new album, so it will be lovely to rediscover so many rarities in one sweep.

“I’m going to do what I call the curio show, which is where I’ll be doing stuff that I don’t get a chance to do very often.

“When I do a gig these days, because there’s so much material now from down the years, there’s always somebody who says, ‘Why don’t you ever do Sleep All Day any more?’ or ‘Why don’t you do that song, you know?’

“There’s always somebody who gets disappointed, so this is a chance to do some of the ones that we still love but that don’t get oxygen very often.”

Charlie says she will be playing a couple of songs from her most recent album, Like Animals, which was released last summer.

But after having to cancel her planned UK tour due to the coronavirus pandemic, she is now looking to launch the album afresh next month when she plays her first concert in front of a live audience in more than a year.

Charlie will be backed by a six-piece band for the show at Kings Place on Friday, June 25.

“It’s a big deal for me,” she says. “I haven’t done a gig with such a big band for years and we’ve got some really great players, including people from all different worlds, actually, which is really nice.

“We’re kind of looking at it as a relaunch of the album because it didn’t get a fair crack before. We had about 30 dates booked and, like all musicians, we just couldn’t do them.” Back in April last year, less than a month into the first lockdown, Charlie had been booked to perform solo at the Oxford Folk Weekend.

Because of the pandemic, this ended up being her first ever online gig and was performed from her home in Wargrave.

The singer hasn’t forgotten the feeling of panic that gripped her when the sound failed just before she was due to go on.

“Blimey, it was an education,” she laughs. “It was absolutely terrifying because it was literally being live-streamed and I’d never done one before. So it was really heart in my mouth.

“The Oxford people were very good. They had a very laid-back sound guy who’d sort of done it all before, so he was very familiar with how it worked.

“We did a sound check at my place a couple of days before just to run through and see that everything was working and that was all fine.

“But I’d said to him ‘Shall I put my keyboard through the little amp?’ because I swap instruments a lot during any set that I do.

“And he said, ‘No, if you’ve got sound coming from the keyboard as well, let’s just keep it simple.’

“We were literally just using the mic from my little laptop, which I had on a stepladder so that it was at the right angle. But then when we did the actual live-stream on the Saturday afternoon he came online to me just before and said, ‘Hey, let’s just do a quick line check, make sure it’s all right.’

“Then he said, ‘Oh dear, the keyboards sound really horrible. Oh, I don’t know what has happened there. Can you plug it into your amp?’ — as I’d first suggested.

“I’d stashed it away out of the room, so I had to rush and get it. Then I had to plug it all in again and I’m literally on my hands and knees underneath the keyboard trying to plug it in five minutes before the show went live.

“I was just palpitating, you know? Worried that there would be this ‘And now we present Charlie Dore...’ and there’d be this horrible silence.

“Anyway, finally, I did get it all sort of plugged in and everything, but I was thoroughly rattled. My face was all red from bending under this thing and my hair was all over the place. So then I was just trying to look like I hadn’t been shot out of a cannon.”

In the event, the show went off more or less without a hitch and the past year has seen Charlie go on to play a number of online gigs, including a fundraiser for the Green Note venue in Camden.

Monday’s concert starts at 7.30pm and will feature two
45-minute sets separated by a
15-minute interval.

Tickets cost from £9 to £20. For more information, visit www.ticketsource.co.uk/black-
ink-music/t-xkoarg

For details of the June 25 show, visit www.charliedore.com