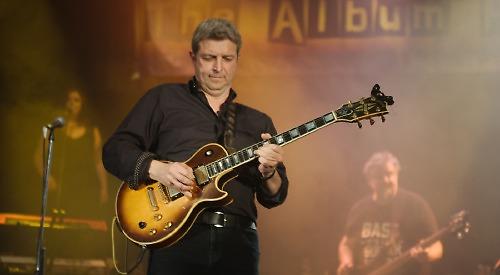 A BAND who specialise in recreating classic rock albums live on stage are playing a “Best of Dire Straits” show at Goring village next Saturday (July 31).

Together they have been staging concerts at the High Street venue for the past five years.

Previous outings have showcased works by the likes of The Beatles, The Eagles, Fleetwood Mac, Led Zeppelin, Santana and The Who.

A “Best of Pink Floyd” show had been lined up for tomorrow night (Saturday) but has now been cancelled by the promoters due to concerns over covid restrictions.

Mr Kirkpatrick, who founded the band six years ago, said: “That was a real shame because we put a lot of effort into putting it together, but the Dire Straits show on the 31st is still going ahead.

“What we normally do is we choose a band and we choose a popular album or something people like — Led Zeppelin IV, The Eagles’ Hotel California or Rumours by Fleetwood Mac — and then augment that with other material from that band, highlighting their career while focusing on that album.

With Album Experience shows typically lasting up to two and a half hours, Mr Kirkpatrick said the quest for maximum authenticity was important to both the band and their audience.

He said: “I’ve seen all of the bands that we’ve done live, except The Beatles, and understand how they put a show together.

“On occasion when we’ve put shows on we’ve brought in other people. So we’ve had sax players, we’ve had backing vocalists — we had three female backing singers when we did Pink Floyd.

“We’ve also added a percussion player and a couple of people on extra synthesisers, because when we did them last time we had original Seventies-era EMF synthesisers that Pink Floyd actually used in the studio on stage with us. So we try and do it totally authentically.”

While mainly a live concern, the band have also recorded a number of the albums they cover in Mr Kirkpatrick’s home studio, copies of which are available to buy at shows.

Following next Saturday’s gig, the Album Experience have further concerts lined up at Goring in October and December.

Looking ahead, Mr Kirkpatrick hopes to be able to stage the Best of Pink Floyd show at a future date and is also planning a concert celebrating the music of Santana.

For now, though, his focus is firmly on Dire Straits, whose 1985 album Brothers in Arms sold more than 30 million copies worldwide.

“We cover the whole career of Dire Straits from their first single right the way through to Mark Knopfler’s solo stuff,” he said.

“Bryn Thomas, who’s the guitarist, can do Mark Knopfler and Dire Straits to a tee. In fact, if you closed your eyes, you’d think it was Mark Knopfler.

“Bryn’s been on the international scene and toured and worked all over the world. And the guys, they’re proper players. They’re real musicians, which makes a difference.

“We do Telegraph Road, we do Brothers in Arms. It’s a two and a half hour show, so there’s a lot of material.