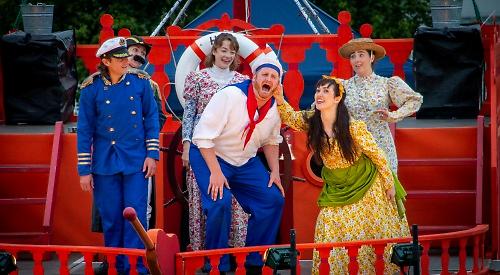 ONE of Gilbert and Sullivan’s most enduring comic operas is being staged at Henley Rugby Club later this month.

HMS Pinafore is coming to Dry Leas at 6pm on Saturday, August 28 as part of the Kenton Theatre’s “summer roadshow” series of outdoor performances at different venues around the town.

Subtitled “The Lass that Loved a Sailor”, the show dates from 1878 and is set aboard the Royal Navy ship HMS Pinafore.

Josephine Corcoran, the captain’s daughter, is in love with a working class sailor, Ralph Rackstraw, but her father wants her to marry Sir Joseph Porter, the First Lord of the Admiralty.

At first she intends to abide by her father’s wishes, but Sir Joseph’s advocacy of the equality of mankind ends up inspiring the young lovebirds to think again.

The show’s producer Stephen Badham says the satire woven into the lyrics has more than stood the test of time and continues to find echoes in today’s politics.

He says: “HMS Pinafore was written in the 1870s and Gilbert and Sullivan are as current today as they were back then.

“It’s a bit like Shakespeare, really — the themes they chose to sing about are as relevant as they were when they wrote them. HMS Pinafore is about class and it’s particularly interesting at the moment to see that one of the main characters is awarded a job that’s above his station.

“It was a parody of the time when William Henry Smith of the newsagent family was awarded the job of head of the Navy and had absolutely no experience of it at all.

“Gilbert and Sullivan took full advantage of this situation and the character of Sir Joseph Porter in the play is based on Smith.

“In one of the songs he’s talking about how he got to the top of his career by sitting behind a desk and if you extrapolate that to 2021 there are lots of people in our political class who are in roles that perhaps they’re not the best experienced for — one of whom had to resign recently. So it’s as relevant today as it ever was.”

For precisely this reason, Stephen and his colleagues at the Illyria outdoor theatre company have seen no need to tweak the show to make it more up to the minute.

“We haven’t changed any of the words that I’m aware of,” he says. “There might have been a few changed just to update them. But, for example, in Gilbert and Sullivan’s The Mikado there’s a whole song where it’s tradition for the person singing it to write new lyrics that bring it into the modern world.

“But that’s not the case so much with HMS Pinafore and, to be perfectly frank, it doesn’t really need it.

“The themes and the words that they wrote are so current today, just as they were then, that not much of it actually needs updating.”

As Stephen tells it, it is the power of the show’s satire that has continued to make it such a hit with audiences down the years.

He says: “A lot of the stuff that was written with that satirical angle, even going back to Shakespeare 400 years ago, is still current today because satire kind of goes with the times — and the pursuit of power and greed don’t really change.”

With a cast of six, the show is touring the country until the end of August.

Having been founded in 1991 by artistic director Oliver Gray, Illyria is among the UK’s longest running and most respected outdoor theatre companies, having been hailed as “top notch” by the Daily Telegraph.

Stephen says: “We don’t really do much indoor theatre — we only do indoor where a venue has a back-up if the weather is too poor for an outdoor production. Having said that, we do perform in all weathers. We only have to stop the show if it’s dangerous — high winds or lightning.

“So even if it’s absolutely pouring with rain, as it was for our first performance of HMS Pinafore at Penlee Park in Penzance, we will play on.

“In Penzance it rained from the moment we arrived to the moment we left, but they sold out and 80 per cent of the audience turned up.

“The thing is that Brits are used to sitting on the beach in their jumpers, so coming out and watching a play in a waterproof is nothing, really.

“It is quite a British thing to do, to very stubbornly sit outdoors and enjoy theatre while it’s pouring with rain.”

As Stephen knows from long experience, the British weather can cut both ways.

He says: “The thing we always say to people is make sure you bring sun lotion and a waterproof because you could probably use both of them on any given day.

“But the weather looks great for the next few weeks, so fingers crossed it’s going to be a decent summer.”

• Tickets for HMS Pinafore cost £18 for adults with concessions £10. For more information and to book, visit www.kentontheatre.co.uk