Pop icon always knew what he wanted to do 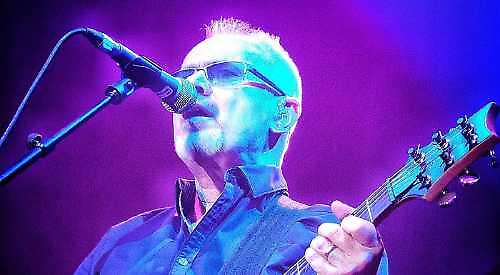 EIGHTIES pop icon Nik Kershaw will be playing live for only the second time in 18 months when he takes to the stage at Rewind South next weekend — and he can’t wait.

The singer-songwriter, who turned 63 this year, is a Rewind mainstay, having made his name with hits such as Wouldn’t It Be Good, Dancing Girls, Human Racing, The Riddle and I Won’t Let the Sun Go Down on Me.

His 62 weeks in the UK singles chart during 1984 and 1985 was unmatched by any other solo artist.

Kershaw was born in Bristol but grew up in Ipswich and won a place at grammar school, which was where he first picked up a guitar.

Such was his love affair with the instrument that he eventually left school in the middle of his A-levels, determined to become a pop star whatever it took.

“I knew what I wanted to do from about the age of 15,” he says. “And that was, yeah, world domination and being adored by my public. Being the centre of attention.”

“So I knew what I wanted to do — but it didn’t happen like that, obviously. I spent three years working in an unemployment benefit office before it actually all kicked off.”

Having started out playing in a number of underground Ipswich bands, he eventually decided to take the plunge and go solo.

After placing an advert in Melody Maker looking for a manager, Kershaw was taken on by Mickey Modern, who succeeded in getting him signed to MCA.

His first single, I Won’t Let the Sun Go Down on Me, was released in September 1983 and reached number 47 in the charts — but hit number two when it was re-released the following year.

This was to be Kershaw’s highest UK chart placing as a solo artist, but he later went on to write Chesney Hawkes’s 1991 number one The One and Only.

Following this success he contributed a song to Elton John’s 1993 Duets album before writing and producing material for the boy band Let Loose.

He says: “The thing about writing for other people, when I started doing it back in the early Nineties, is that I had to kind of relearn how to write songs, really.

“The one criticism that my publisher kept throwing at me was that they sounded a bit too much like Nik Kershaw.

“So I had to go back and start writing more generic — especially lyrically more generic — kinds of things. Because I was putting words into other people’s mouths.”

Eventually, though, Kershaw found that he had written a collection of songs that he could not envisage being recorded by other artists.

These were to form the basis of 1999’s 15 Minutes, his first solo album for 10 years. Looking back, he says: “I was coming up with lyrics and things where I thought, well, you know, this is not about anyone else but me, really.

“I thought I either don’t record these — just ignore these songs — or I record them myself, otherwise they’re not going to get recorded. So that’s what happened.

“Those songs were collated over a period of about three or four years because I’d get an idea and I’d just sort of dump it on the side because I thought, well, no one’s going to sing that.

“So I just kind of put it on hold for a bit, but then in the end you can’t ignore the songs because they just kind of torment you and wake you up at four o’clock in the morning.

“The only way you can kind of exorcise them is to record them and get them out of the way.

“And I did that — like, I had a collection of about nine or 10 songs and so I was asking myself what do I do with these?

“I’d hooked up with my old manager again and he said, ‘Well, release them, obviously.’ So from that point on I started recording under my own name and started gigging again.”

With his Eighties success having peaked with his appearance at Live Aid in July 1985 — an experience he has described as “absolutely terrifying” — Kershaw says his approach to writing and performing as a solo artist was distinctly different the second time around.

Poignantly, he admits to having suffered from impostor syndrome throughout his career.

“I kind of spent most of the Eighties trying to hide the fact that I was a complete fraud,” he says.

“I figured that if I just wrote very ambiguous lyrics and lyrics in the third person and stuff like that then nobody would figure out that I was actually an impostor.

“That was my issue at the time, but then you kind of figure out that actually the easiest thing to write about is your own experiences and your own feelings. So that’s what I started doing back in 1999. From then on, really.” Kershaw’s more personal approach to his craft has paid off and he has continued to write, record and release new music — up to and including last year’s EP These Little Things and album Oxymoron.

But even now he confesses to feeling like an impostor on occasion.

“It still kind of lurks, a little bit,” he says. “I mean, it will ambush me in the middle of a gig sometimes.

“And I’m thinking, how did I get here? You know, why me? Why am I on this stage and having this great experience?”

If that doesn’t sound too bad, Kershaw confirms that he loves playing at festivals like Rewind.

“There is nothing like that buzz,” he says. “Just sort of the nerves before you go on and walking on that stage and there’s that sea of people.

“It’s just this — I’m not articulate enough to describe it but it’s something that I’ve missed hugely over the last couple of years. So I’m looking forward to it.

“Bono once said that the stage is a platform shoe. I mean, it pretty much is. It make you feel taller and — yeah, I am a different person on stage, absolutely. I think most performers will tell you that.”

• Nik Kershaw plays the main stage at Rewind South on Saturday, August 21. As in previous years, the festival is being staged at Temple Island Meadows. For more information, including the festival’s full line-up, and to book tickets, visit www.rewindfestival.com