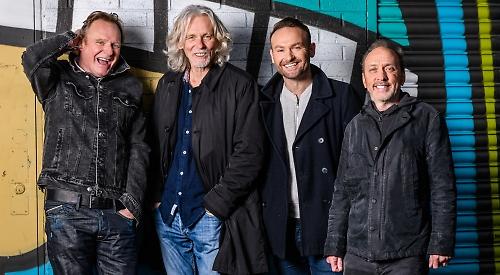 THEY started out wishing they were lucky, but as they approach their 40th anniversary year Scottish hitmakers Wet Wet Wet are enjoying a new lease of life.

The band, who formed in 1982 while still at school in Clydebank, near Glasgow, headline the Rewind South festival at Temple Island Meadows this Sunday.

Having parted ways with original lead singer Marti Pellow in 2017, the Wets now have a new frontman — former Liberty X singer Kevin Simm, who joined in 2018, two years after winning The Voice UK.

Keyboard player Neil Mitchell has been in the band from the start, along with bass player Graeme Clark and drummer Tommy Cunningham, while guitars are the province of Wet Wet Wet’s unofficial fifth member, Graeme Duffin, who joined in 1983.

Together, the group are preparing to release their seventh studio album The Journey at the start of October before embarking on a 20-date UK tour.

They have just released a new single, Back to Memphis, the title of which references the time they spent in America prior to releasing their 1987 debut album Popped In Souled Out and 1988 follow-up The Memphis Sessions.

“We actually got signed in 1985 but we didn’t have a record out until 1987 because we just kind of went through different producers,” says Neil. “Nothing was really working for us. You get signed to a record company and you think, ‘Oh brilliant, we’ve made it!’ but that’s just the beginning, you know?”

Fortunately, early on in their development, the band had met Elliot Davis, the man who would help set them on the road to success.

“We got together and we played a nightclub in Glasgow,” recalls Neil.

“This is early 1983, something like that, and we met a guy who was going to turn out to be our manager and he kind of guided us through the next 10 years or so.

“He took us under his wing and probably made us what we are.”

Having scored their first number one single in 1988 with a cover of The Beatles’ With a Little Help from My Friends in aid of Childline, Wet Wet Wet’s biggest hit came six years later when their version of The Troggs’ hit Love Is All Around featured on the soundtrack of the Richard Curtis film Four Weddings and a Funeral.

The song spent a total of 15 weeks at the top of the charts, very nearly equalling the record of 16 weeks held by Bryan Adams’s (Everything I Do) I Do It for You, which still stands.

Both hits are sure to feature in the band’s Rewind set, along with 1992’s self-penned number one Goodnight Girl and fan favourites such as Sweet Little Mystery, Angel Eyes, Temptation, Julia Says and Wishing I Was Lucky.

Neil confirmed that a greatest hits set is on the cards for Sunday’s hour-long headline slot.

“I think that’s what the public want and for us to deviate from that isn’t necessarily a good idea,” he said. “We want to keep the audience happy but we’re going to play the new single Back to Memphis too, so at least that’s something they’ve not heard before and can hopefully enjoy.”

Thanks to the UK’s coronavirus lockdowns, the band’s “journey” to make their new album proved markedly different to anything they had experienced before.

“Because of Kevin being the new singer we had been talking about maybe recording some of the old songs with him on them,” says Neil.

“We did that first and then we thought it would be great for Wet Wet Wet to release a new album with Kevin as the singer.

“We started work on that at the end of last year and it was kind of weird because we’re all used to going into the studio and being in the same room.

“Instead we were all kind of doing it in our houses, sending each other files back and forth with ideas. We all sent our parts to Graeme Duffin so he could keep it in some sort of order.

“It’s weird to send somebody your parts and not really know how its going to sound, because when we’re in the studio we can all bounce off each other and say why don’t you try this or that or something completely different.

“Whereas if you’re in your house by yourself, you’re kind of in your own little world — you just do what you think is right and there’s nobody giving you an opinion.

“It got quite taxing at times because I would think that maybe I’d done a nice part but I didn’t know, whereas if we were in the studio you would know pretty much immediately. It was the strangest album we’ve ever done, just because of the circumstances.”

Now the album is in the can the band are feeling positive about it, but Neil is looking forward to getting the fans’ verdict once it is released.

He said: “Looking back on albums before, you become so involved in it and it becomes so much a part of your life that it’s hard to separate from it.

“I think we need other people to comment on it now because we’ve worked with it for so long and it has been quite a difficult journey — sorry! — to make the thing, you know?

“I think we all kind of need a break from it but we would also love people to hear it and tell us what they make of it.”

With the special edition of The Journey set to include a bonus CD with new recordings of some of Wet Wet Wet’s most popular hits, Neil and his bandmates have been reflecting on their own long and winding road.

“You kind of forget and then when it’s all chronicled you go, ‘Oh, I remember that.’

“It’s just very bizarre to look back and go, ‘My god, we’ve had quite a fulfilled and lucky life’, you know?”

Wet Wet Wet may have been a going concern for the best part of 40 years, but for Neil nothing beats the thrill of playing live.

He says: “It’s incredible when you’re driving to the venue and you see all these people who are going or who are already in the venue watching the bands that are on — it’s just amazing to see again because you kind of forgot what it was like, you know?

“It’s like somebody’s taking those chains off and you can just do what you used to do — and obviously the vibe you get back from an audience singing your songs, you can see them singing the songs along with you and dancing.

“One of the reasons to do this is to see that reaction and see people enjoying what you’ve done. It’s just an incredible feeling.”