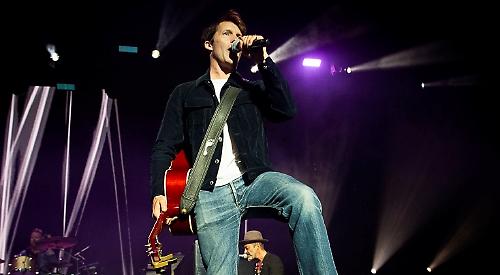 WHEN I first heard You’re Beautiful by James Blunt I was six years old. Little did I know that 17 years later I’d still be singing it along with thousands of other people.

I was pleasantly surprised at how much of a showman the Hampshire-born singer-songwriter turned out to be as he headlined the “floating” stage.

As many of his greatest hits are fit for first dances at weddings, I was expecting more of a slow evening.

But as soon as Blunt opened with How It Feels to Be Alive and marched across the stage with power, I knew we were in for a good night. The audience bobbed along through his performance of Cry and Smoke Signals before immediately leaping to their feet to sing along to his hit Wisemen from 2004’s Back to Bedlam.

They stayed on their feet and swayed to High, from the same album, before Blunt treated us to Champions, from his 2019 release Once Upon a Mind.

The 47-year-old then asked the audience for help with singing his next song as his band left the stage. We were all too happy to belt out the lyrics to Goodbye My Lover as Blunt held out his microphone to the crowd and encouraged us.

The former reconnaissance officer then told the crowd he wanted to sing two songs for his two sons.

I hadn’t heard the songs, The Greatest and I Told You, also from the 2019 album, before the festival but the lyric videos played on a projector behind Blunt as he performed really helped the audience get involved.

After the sweet homage to his children, Blunt then performed Carry You Home, Postcards and Stay The Night, before the moment had come that the audience had been shouting for.

“My life is brilliant, my love is pure,” he sang with no warning and the crowds immediately jumped to their feet once more to help him belt out his signature tune.

People were swaying with their partners or waving their phone torches in the air and it was a “beautiful” moment to watch in front of the River Thames on a luckily rather warm evening.

After performing what is still his greatest hit, Blunt brought the energy back and had people dancing along to some upbeat songs: Same Mistakes, So Long, Jimmy and his collaborative 2017 hit, OK, written with DJ and producer Robin Schulz.

Blunt then abruptly left the stage, which was met by crowds of people stamping their feet in the bandstand or clapping as loudly as they could for an encore.

I was excited to hear his new single, Love Under Pressure, which was released only a week before the festival and was relieved when it was the first song played as he returned to the stage.

It was the first time he had performed the song live and I felt honoured to be one of thousands to be able to hear it as Blunt pretended to surf on the piano.

He then finished his encore with 1973 followed by Bonfire Heart. People were dancing and waving at Blunt and some people at the front even managed to get high fives from the singer.

I came away really surprised at how much of an energetic and engaging show Blunt put on and a reinvigorated fan for sure.